Barcelona players see speaking to the press as part of their job, according to football writer Graham Hunter, interviewed by CHRISTOPHER DAVIES

It was the proudest moment of Graham Hunter’s career as Glenn Moore, chairman of the Football Writers’ Association’s books committee, announced that his Barca: The Making Of The Greatest Team In The World had been chosen as the football book of the year at the British Sports Book Awards 2013.

“I am shocked and delighted,” said Hunter whose book pipped Gullem Balague’s biography of Pep Guardiola for the prestigious prize. It is a sign of the times when two books about a Spanish club dominate the voting and Hunter said: “When Terry Venables went to Barcelona and led them to the European Cup final, losing to Steaua Bucharest on penalties, Spanish football was alien to British television.”

Sky Sports changed that perception with La Liga games shown each weekend along with the excellent Revista De La Liga magazine show where Hunter and Balague are regulars.

The awards night at Lord’s was somewhat different to Hunter’s introduction to the world of football writing in 1995 when the Daily Mail opened in Scotland. Hunter had applied for a job, but had heard nothing so decided to pay them a visit to ask why, which did not go down too well.

Hunter said: “I told them my CV was sent three weeks ago and couldn’t believe no one had answered my letter. I wanted to know what was going on.”

What was soon to be going on was the sports editor helping the young upstart to vacate the building.

“They were literally, and I mean literally, holding me by the back of the collar – well, it was sports editor Bryan Cooney – throwing me out of the door when someone came running in and shouted ‘There’s a press conference at Parkhead. It’s a new signing, we don’t know who it is.’”

It was a sliding doors moment because as luck would have it, the Mail were thin on available reporters. One had been sent to Pittodrie to doorstep Willie Miller who had been sacked by Aberdeen, others were elsewhere. In the pre-mobile phone era it was impossible to contact anyone so they stopped throwing Hunter out and instead told him to get along to Celtic.

“It was Pierre van Hooijdonk,” he said. “When I arrived at Parkhead there were two camps in the press room. A growling set of Scottish reporters who were asking ‘who’s this new kid?’ and some Dutch journalists.”

No prizes for guessing who Hunter decided to sit with. “I explained it was my first day and asked where van Hooijdonk was as he was late. They told me this was because he was playing cards with his NAC Breda team-mates until 3am to say goodbye. He had missed his flight and Celtic were pretending there was fog at Schipol Airport, which was why he had been delayed.”

Hunter thanked the Dutch contingent for the background which was not known to the growlers. One Dutch journalist asked him if he was Scottish and when Hunter confirmed yes, he was, he was asked if he could take them to a kilt shop – they wanted van Hooijdonk to wear a kilt for a photo. In return the Dutch pack gave the Scottish rookie chapter and verse on van Hooijdonk and to Hunter’s delight at the press conference no Scottish reporter asked why the striker was three hours late. Result.

Returning to the Mail offices with a scoop, Hunter was given a warmer reception than his initial arrival. The editor decided it was the back-page lead and those who had tried to throw Hunter out were delighted with his exclusive.

So delighted that he was offered a job – as a rugby reporter.

“I did this for about nine months before going over to football,” said Hunter who eventually moved down to London when Cooney became sports editor. Cooney’s approach to the job was effective if not popular with everyone and Hunter’s appointment as football correspondent raised eyebrows to new levels.

Hunter has never shirked a challenge and immersed himself into his new post. “I loved reporting on England, Manchester United, Arsenal and the top clubs…the press pack, in the majority, became people who inspired me.”

He was particularly grateful for the help of Brian Woolnough, who died last year, Steven Howard, and Nigel Clarke “who either saw someone who was young and lost or someone they liked….they took me under their wing.” Football writers never forget those who have helped them and when Hunter was injured on a trip to Luxembourg he remembers how Oliver Holt, Lee Clayton and Paul McCarthy “were brilliant”.

He said: “Our industry is full of remarkable, interesting people and I found working in London a deeply enriching part of my life. I miss the English press scene and adored what I was doing.”

In 2002 Hunter decided to realise an ambition that had started 20 years previously at the 1982 World Cup. “I promised myself I’d go back to Spain,” he said. “The moment I crossed the border from France to Spain I knew it was for me. I’d grown up adoring Spanish football even though finding out information or seeing clips in those days was difficult.

“The idea of going to the city of the club where Steve Archibald [who played for Aberdeen where Hunter was born] played and where Terry Venables had managed made me choose Barcelona.”

The bad news was that Hunter had no job to go to and couldn’t speak a word of Spanish while Louis van Gaal, not the most media friendly of coaches, had just been reappointed. In 2002-2003 Barca ended the season sixth, their lowest finish in La Liga in 15 years. For the benefit of anoraks, the starting XI was: Bonano – Gabri, de Boer, Puyol, Sorin – Mendieta, Xavi, Cocu, Riquelme – Saviola, Kluivert.

Hunter said: “In the summer of 2003 Barcelona were close to not even being able to pay anyone’s wages. They were in the midst of a six-year run without a trophy.” 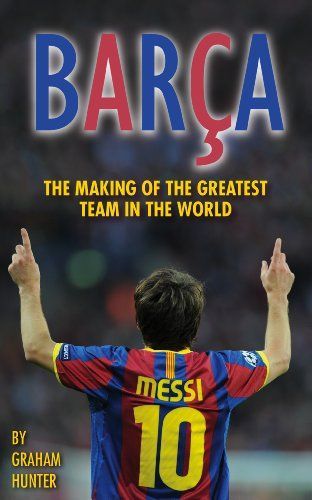 The appointments of Frank Rijkaard and a new president, Joan Laporta, saw a gradual change in Barca’s fortunes. The Dutch coach phased out the old guard and led the Catalan club to the title in 2005 and 2006. By then the team was: Valdes – Oleguer, Puyol, Marquez, van Bronckhorst – Edmilson, van Bommel, Deco – Larsson, Eto’o, Ronaldinho.

In 2008 Pep Guardiola succeeded Rijkaard, the remarkable Messi-inspired Barca side winning 14 trophies in four years, making him the most successful coach in the club’s history.

By then Graham Hunter was fluent in Spanish while the rise and rise of what many observers call the best club team they have ever seen ensured plenty of work for the reporter whose career had started by almost being thrown out of the door.

Sir Winston Churchill said that if you have a job you love you will never do a day’s work in your life and Hunter is one of many football writers who fit that category, the bonus living in a city where the climate is superb while following a club where the working conditions for the media and the attitude towards the press are a million miles from those experienced in Britain.

Clubs here keep the media at arm’s length, dishing out bans for headlines that are not to their liking. Hunter believes the press should have been collectively stronger, standing up to such over-zealous authority that at times has bordered on bullying.

“It should make us embarrassed,” said Hunter. “For some reason, and it’s the fault of our profession, we aren’t unionised enough, we don’t complain enough. In Spain players are generally more eager to speak to the press, more accepting of their duties and see it as an integral part of their job.

“Occasionally they will be pissed off with us, occasionally they will say ‘no’, but generally they view us as people to be judged as we act, not as journalists who therefore must automatically be shunned. They don’t bring a Mastercard machine and say ‘that will be 20,000 euro.’ In my 11 years in Spain no one has ever asked me for money for an interview.

Up until the 1980s English-based football writers enjoyed a similar rapport with leading players and managers, but dealings with the press are far more sanitised now.

Two players gain an honourable mention from Hunter – Iker Casillas and Xavi. “Both are high achievers with an enormous amount to say. They are decent people, intelligent, interesting and funny.”

The appreciation of Hunter by his adopted home was shown by an invitation to join the players in the dressing room after Spain won the 2010 World Cup and again following their Euro 2012 triumph – a scenario unthinkable from an English perspective.

“Their attitude was ‘you’ve put in the miles, you’ve slogged up and down the roads – come in.’ It is exactly the same as I did with England and it says everything about Spain, not me.”

The idea for the book came from the publishers, BackPage Press who “twisted my arm almost to breaking point”, said Hunter. “The co-operation I was given was astonishing. Nobody said ‘no’ and nobody asked for copy approval.

“It was a pleasure to deal with the players and I thoroughly enjoyed telling the story.”