The latest book from the BBC’s former political correspondent is unlikely to settle any bar room debates over the greatest race horse. But it might prompt a few, writes ANTON RIPPON

And he’s also done a bit of sports journalism. More than just a bit, in fact. 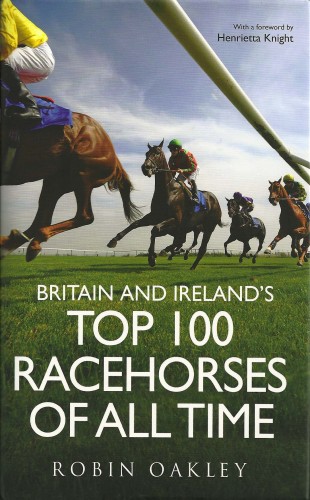 A former racing correspondent of the Financial Times, for almost 20 years Oakley has written the Turf column in The Spectator, and is the author of several books on horseracing including Valley of the Racehorse which chronicles a year in the life of the Berkshire training centre, Lambourn; a history of the Cheltenham Festival; a biography of trainer Barry Hills; and, reviewed here recently, Clive Brittain: The Smiling Pioneer, the biography of one of the most innovative trainers in the sport.

The productive Oakley has added another book – Britain & Ireland’s Top 100 Racehorses Of All Time, in which he embraces the daunting task of assessing the best horses – both National Hunt and Flat.

Oakley’s is, quite obviously, a subjective selection, one that will provoke a few friendly arguments among the racing fraternity. Basing his reasons on his broad and deep knowledge of horse racing, Oakley makes his case for the animals that he sees as standing out above the rest as truly great.

All the names that you would expect are here – Kauto Star, Desert Orchid, Red Rum, Nijinsky, Arkle et al – but where does Oakley rank them?

Great names of past and present are brought together as Oakley delves beyond mere statistics to look at the “fun factor”, those horses that seized the public’s imagination.

So how do you compare a fleet-footed sprinter with the robust staying power of a steeplechaser? As Oakley explains, this isn’t a book for the purists. You won’t find detailed analysis of precise handicap ratings or fractional race timings.

He says: “Improvements in racing surfaces and inconsistencies in watering practices for me make the stop-watch alone an unreliable guide to the relative abilities of horses from different generations.

“Go for one kind of quality alone and you would simply have to list the top 30 Derby, Arc and Cheltenham Gold Cup winners, which would be rather too predictable.”

Yet for Oakley, racing is the simplest form of sporting contest involving man and beast: it is just a question of who gets there first. But it is also about colour and excitement, athleticism and bravery – and, yes, about sentiment and emotion.

“This is a book for those who find the little hairs on the backs of their necks standing up as Frankel walks from the saddling boxes into the parade ring,” he writes.

The selection begins at number 100 with Meld, the filly who in 1955 won the 1,000 Guineas, Oaks, Coronation Stakes and St Leger, with earnings of £43,051, which remained for many years an all-time record for fillies.

At number 50 is Big Buck’s, who in 2012 rewrote the record books with victory in the Ladbroke World Hurdle, then the three-mile hurdlers’ championship at the Cheltenham Festival, which made him the first hurdler ever to win four Grade Ones at the Festival. Then he completed a quartet of victories in the BGC Liverpool Hurdle, his 17th consecutive victory surpassing the record 16 wins amassed by three-times Champion Hurdle winner, Sir Ken, in the 1950s.

By the way, Sir Ken ranks 57th in Oakley’s list. Who is Number 1? Well – cliché alert – you’ll have to buy the book to find out.