For the second time in his career, ERIC BROWN tackles Sir Bobby, only this time in book form

Before David Beckham, there was Bobby Charlton.

For years, Charlton was the most famous footballer not just in England, but on the planet, his name celebrated in the remotest village, the tiniest hamlet, the smallest island across the globe.

Charlton is, of course, one of only two English players to hold World Cup and European Cup medals (Nobby Stiles being the other).

But this story, ghosted by James Lawton, a past SJA Sports Writer of the Year, is not just about Charlton. It is his singular view of how England’s greatest sporting triumph was plotted and achieved and his relationships with his teammates.

I once actually got to play against Bobby Charlton. It is one of my greatest sporting moments of my life. It was during a media tournament organised by a sporting goods supplier at the 1988 European championship in Germany. The England team was vastly over-subscribed, not only with print journalists but with broadcast commentators such as Paul Mariner, Gordon Taylor and Howard Wilkinson. And, of course, Bobby.

There was no way I’d get a game for an England team managed by Mike Hart of the London Evening Standard. But Russia had no journalists covering the tournament, so to ensure they could put out a team at all, several of us volunteered to “switch allegiance”.

I pulled on the red shirt and lined up alongside Scottish international Roy Aitken, who decided I would be his defensive partner, probably only because I’m 6ft 3in. “Mark Mariner,” Aitken growled at me. Thanks Roy.

Those memories are jogged by a photograph taken by the late Ken Montgomery, of the Sunday Mirror, of Bobby and myself after the match.

Another indelible memory of Bobby is his incredible part in the best match I ever saw – England’s World Cup semi-final against Portugal on July 26, 1966. 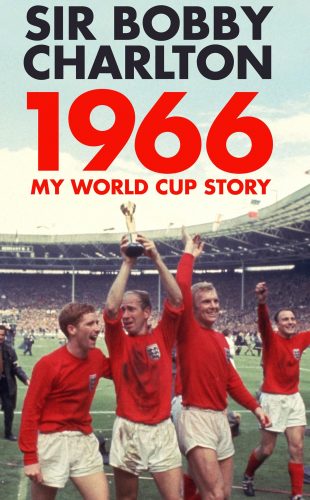 Both teams played open, attacking football with Charlton’s inspirational game being matched by that of Eusebio. It could have gone either way but in the end Bobby’s two goals in a majestic performance were enough to send Eusebio back to the dressing room with tears of disappointment streaming down his face. In Portugal they still call it “the game of tears”.

Eusebio’s threat was mainly snuffed out by Nobby Stiles, and Charlton is keen to credit the tough-tackling Manchester United midfielder for much of his own success.

He recalls how manager Alf Ramsey brought Stiles into the England fold mainly to act as his minder with a mission: to shield him, win the ball and pass it to him at every opportunity.

The close relationship between Charlton and Stiles is obvious. Charlton refers to his cheery short-sighted colleague as his “brother in arms” and recalls a recent emotional encounter when the unwell Stiles barely recognised him.

Charlton’s World Cup tale kicks off with the appointment as England manager of  Ipswich Town’s Ramsey.

Ramsey got the England manager’s job ahead of the favourite, Jimmy Adamson of Burnley. The new manager had been scarred after facing the 1953 Hungarians for England in a 6-3 Wembley defeat, but he impressed Charlton with his single-minded attitude and conviction that England would win the World Cup.

The book examines some of Ramsey’s major decisions in the build-up, like the exit of skipper Jimmy Armfield after a couple of poor performances and the race to succeed him at right back, which at one point seemed certain to be won by Chelsea’s Ken Shellito.

Charlton’s thoughts on Ramsey’s selections are entertaining and there’s an absorbing chapter on the omission of Jimmy Greaves from the final against West Germany.

Charlton lifts the lid on what happened in England’s hotel and dressing room, the roles of each of the World Cup winning XI and reveals his thoughts as the tournament unfolded.

When the surviving “Boys of ‘66” fit enough to do so get together for their anniversary reunions, they will certainly trot out some of the stories Charlton relates here while toasting absent friends Bobby Moore and Alan Ball.

Their achievement for English football is still unmatched after 50 years and it doesn’t look like being surpassed any time soon. Isn’t it time, before it’s too late, to recognise this by the award of knighthoods to all the rest of the winning XI who gave us such magnificent memories from 50 years ago?