One regional sports journalists has set the bar very high in the competition for “Most Unlikely Sports Book Title of 2016”.

Gus Honeybun… Your Boys Took One Hell of a Beating is the first book to be published by Simon Carter, the sports editor of the Southern Daily Echo, who carries the unfortunate burden of being a fan of his home town team, the spectacularly unsuccessful Exeter City. 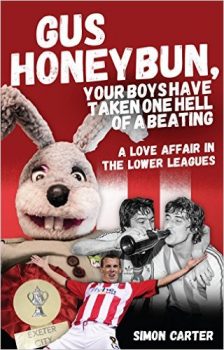 Exeter, as any sports desk sub will know, play at “the other” St James Park (note the apostrophe, or lack of it). Given the club’s 112-year history of regular disappointment and frustration, there are some who wonder whether the ground might better be named after St Jude, the patron saint of lost causes.

Carter’s football supporting highlights, for instance, are trips to Halifax, Crewe, Carlisle and Maidstone. Things have been looking up a little bit since the club returned to the Football League after a five-year “rest” in the Conference.

The book is sub-titled “A love affair with the lower leages”, though it might also have a reference to the English motorway system, since the west country club has to make good use of the roads for even the most routine of fixtures.

With the self-deprecation you’d expect from an Exeter City fan, on his travels with the Grecians he meets Brad Pitt and Freddie Starr; writes about Uri Geller in the local newspaper… with miserable consequences; and wins a tenner for scoring a goal in front of 3,000 fans – albeit past a small girl dressed in a large turkey costume.

And the Gus Honeybun of the title? Only the second-longest lasting puppet on British TV, after Sooty (according to Wikipedia).

To find out more, the book can be ordered here.