STEVEN DOWNES on the “spiffing!” and “sporting!” latest book from one of the Association’s most prolific authors

The stiff-upper lip, Dunkirk spirit and the Keep Calm And Carry On attitude have become much-parodied features of the British wartime character. Yet the calm, quiet stoicism that those aspects of our forefathers’ and mothers’ lives never fail to astonish when reconsidered at this safe distance. 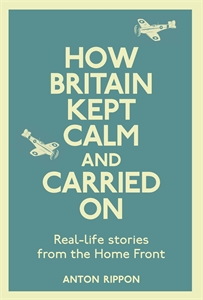 Here’s a good example from a recently published book:

“A player whose stroke is affected by simultaneous explosion of bomb or shell, or by machine-gun fire, may play the ball from the same place. Penalty: 1 stroke”.

The sign went up at Richmond Golf Club in south-west London in 1940, just as the Battle of Britain was getting underway in the skies above the capital. The very thought of getting out and playing a round of golf at the time of Dunkirk or while dog fights might be going on above your head – even in as secluded a part of London as Richmond – seem remarkable today.

It is but one, sporting example, from How Britain Kept Calm And Carried On, another outstanding piece of social history compiled over four decades by this website’s regular contributor, Anton Rippon.

As Rippon has detailed previously on sportsjournalists.co.uk, apparently it was all down to Hitler that he grew up to be a Derby fan, rather than a Hull supporter, otherwise he might have been at Wembley today for the FA Cup final if his family had not been Blitzed out of their Humberside home.

And while Herr Hitler’s role in the Rippon family’s house-hunting might be slightly over-stated, the role of Derby in Rippon’s up-bringing and development into a stalwart of regional journalism is not. It was as long ago as 1978 that he put out an appeal in national and local papers for wartime anecdotes. The response was overwhelming, and has provided Rippon with a rich vein of articles and books ever since, at least when publishers can be persuaded to take on the project.

Encouraged by the critical success of Rippon’s Gas Masks For Goal Posts of almost a decade ago, Michael O’Mara Books have this month published How Britain Kept Calm And Carried On, which lays out in the author’s easy and engaging style tales of the Home Guard, the Home Front, rationing and unexploded bombs, from Bermondsey to Burma.

And as you’d expect from a paid-up member of the SJA, there’s a smattering of sports stories in among them, too.

Such as detailing the Army v RAF match at Lord’s in July 1944 where, for the first time in the history of cricket, the annotation of “doodlebug stopped play” was appropriate. Not that the players left the field when the rocket bomb was heard approaching. Not at all, stiff upper lips and all that: those out in the middle merely lay on the ground until the rocket landed a safe distance away in Regent’s Park.

The next ball, Jack Robertson, the England and Middlesex opener, duly dispatched for six. Keep calm and carry on…

“Doing your bit” for the war effort was applied to what sporting fixtures were going on, arranged for diversion and morale as much as any real competition. “You never knew which team was which because blokes were coming home on leave and then couldn’t get [to the match],” Harold Atkinson, the pre-war Tranmere player, is quoted by Rippon. “I’ve been at Goodison and it’s come over the Tannoy: ‘Any footballers in the crowd?’ Some fans go to games with their boots, just in case.”

The book is at one sentimental, funny, and also sad, an account of how, with minimum amount of fuss while everything around them was in chaos, a generation somehow managed to overcome huge adversity.