If it hadn’t been for Hitler, I’d be a Yorkshireman. More than that, I’d be supporting Hull City in the FA Cup semi-finals. 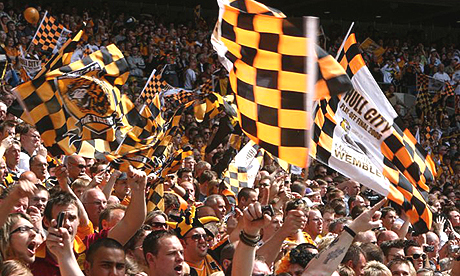 The decision by the Austrian with the comedy moustache to wage a massive bombing campaign against British cities changed my life forever, even before it had begun.

I’ll explain: at the start of the Second World War my parents were living in Kingston upon Hull, where my father was a Linotype operator on the Hull Daily Mail.

As the centre of that city was steadily being demolished by Goering’s Luftwaffe, each morning my old man picked his way through the previous night’s rubble to get to work wearing a Hull Daily Mail armband so that the police would let him through cordoned off streets. I still have a faded cutting showing him and his fellow compositors at the newspaper. The purpose of the story was to show them all carrying on their work while wearing gasmasks. So it seems the most pointless group photograph ever kept as a memento (“That’s me, second from the left, honest son”). But there was a war on…

Each tea time he would return with the news: “The docks copped it again last night,” or “There aren’t any houses left in Grindell Street.” Parts of Jameson Street, where the Mail had its offices, were badly damaged. Often my father went straight down to work after a hair-raising night spent fire-watching on the roof of the Mail building. He never did find out what happened to his pork pie supper that disappeared when a bomb exploded uncomfortably close by.

More than 1,200 citizens of Hull were killed and 95 per cent of the city’s houses damaged. When the houses directly opposite our home were flattened, with the blast throwing my mother from one end of their hallway to the other, it was the final straw. They decided it was time to head for my mother’s hometown of Derby, which despite its Rolls-Royce factory making the Merlin engines for Lancaster bombers and Spitfires, somehow missed the worst of the Blitz.

So I missed out on being a Yorkshireman. It was all Hitler’s fault that I didn’t grow up supporting the Tigers instead of the Rams.

And that, in a roundabout way – why rush when you can take the scenic route? – is what I want to say: how accidents of birth dictate which football club you follow. And which newspapers you finish up working for, too. I expect that besides making my way to Boothferry Park instead of the Baseball Ground every other Saturday, I, too, would probably have been working at the Mail offices rather than those of the Derby Evening Telegraph.

Still, for the reasons mentioned above, Hull City has always been my “second club” – we’ve all got one, haven’t we? – and that is why I’ll be glued to the box when they take on Sheffield United at Wembley. It’s also why I have taken a special interest in owner Assem Allam’s plan to change the name of Hull City to Hull Tigers.

The 74-year-old has threatened to sell if he is not allowed to change the club’s 110-year-old title, which is a shame because I believe that he has done a lot of good, not only for Hull City but also for Hull city.

There is no appeal process with the FA; its Council decision is final. Allam can resubmit next season if he wants to. Meanwhile, the fans’ group City Till We Die said it was “delighted” with the decision and it’s just a pity that the owner doesn’t quite get what it means to supporters. This isn’t anywhere near as daft an idea as Robert Maxwell’s Thames Valley Royals suggestion for a merged Oxford United and Reading, but it still shows a profound lack of understanding about what it means to be a supporter of a football club.

And here I’m talking about real supporters. If you were born in Lincoln, for example, you’re perfectly entitled to wander round your hometown wearing a Manchester United replica shirt, as I saw a young man doing only last week. But I would much rather you wore the red and white stripes of the Imps (they still play in red and white stripes, don’t they? You can’t even always guarantee that, these days).

Anyway, Hull City for the Cup. I’m having a tenner on it, just for what might have been…