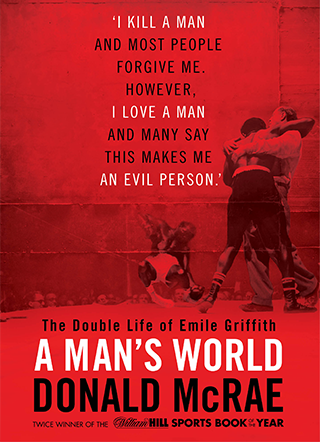 He fought as a professional for 19 years, had 15 years in world title fights, fought 24 times for a version of the world title in 112 fights and battled with his sexual identity every day he lingered in the man’s world of boxing.

Griffith was gay, loved the exotic trannies of New York’s Times Square, the tiny clubs that dripped with sweat and bodily fluids. The champion boxer flitted between the often illegal dens, broken secret joints that dotted his landscape of concealed pleasures, arm in arm with friends like Miss Coco and assorted go-go boys. This was kept hidden from the boxing public.

The other Emile was one of the world’s greatest boxers, a fearless man and veteran of some of the sport’s finest and notorious fights. He killed a man live on national television in America and to this day the end of Benny Kid Paret’s life is frightening to watch; Paret slumps to his death after too many punches in front of a referee that froze.

The raw statistics prove that Paret survived in a coma for a few days, his bedside under siege from his bride, but they only gloss over what happened in the ring at Madison Square Garden that night in March, 1962. Griffith had been called a maricon, Spanish for faggot, by Paret and that was the fight’s deadly hidden agenda. It was a nasty time.

Donald McRae loves Emile Griffith and this book, A Man’s World: The Double Life of Emile Griffith, is a glorious tribute to the heroic battler. The rumours end, the gossip stops and McRae goes deeper and deeper into a history that simply could not be written at the time. It is gripping in revelation, shocking at times in explicit depth.

Griffith tumbled from fight to fight, losing and winning and getting closer to a world title when only eight men could be called world champion. It was a murky world of deals, counter deals and injustices that even now, 50 years later, are hard to imagine. McRae elegantly steers the path between the illicit sexuality of Griffith and the glory the boy from the Virgin Islands had in the boxing ring.

There is enough denial, covert trysts and hardened hacks to make the whole thing at times seem like an invention, the world of a fantasist. However, this is all real, it happened and it remains one of sport’s most extraordinary tales. If Griffith had not been gay, a forbidden rider in New York’s steamy caverns, then his ring achievements would have been enough to make him remarkable.

There are no false claims attached to this book, just a moving quote and a frozen picture of death on the sleeve. This is the real story of Emile Griffith’s double life and it is quite unbelievable. McRae writes that his fighter “was a king and queen rolled into one”. He was hated, feared and loved and this brutal but beautiful book tells his story.