Jump jockeys are a singular breed. Living on a permanent diet, pursued by an ambulance and living with the certainty that they will crash to the ground on a regular basis. And the knowledge that at the end of the season they would always finish behind AP McCoy. 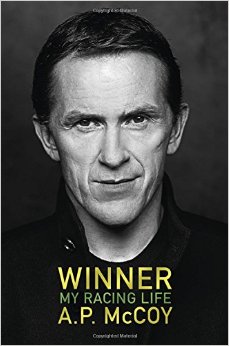 AP’s relentless pursuit of winners led to him being champion jockey 20 times in a row as he racked up more than 4,000 winners. This is a man who, as a teenaged apprentice, broke his leg in two places riding out one morning at The Curragh. As he lay in agony waiting for the ambulance, the young jockey saw his then employer, flat trainer Jim Bolger, standing over him, saying: “You know your trouble McCoy? You’re too soft.”

It was a pivotal moment in the life of Anthony Peter McCoy and certainly no one would ever think that of him again. It is typical of his views on life that he does not hate Bolger, but rather likes him.

For much of his riding career, McCoy was not really a people person. He was a numbers person, an obsessive driven to win. His recollections of riding with broken collar bones, breaking his back, of defying doctors and suffering agonies in the saddle are not for the squeamish.

His autobiography is honest, as he not only recalls the glories of Grand Nationals, Gold Cups and Champion Hurdles but his bloody mindedness, rudeness and on occasion his ability to be utterly charmless.

He expresses his regret at his behaviour but puts it down to his single-minded pursuit of winning. He even found reasons to delay marrying the saintly Chanelle for fear that marriage and having a family might take away his ruthless edge.

He talks movingly about his children Eve and Archie and he and Chanelle’s IVF treatment when his years of wasting, hot baths and saunas had rendered straightforward reproduction impossible. He also reveals a very deep sadness that the inevitable fatalities of racehorses brought.

Written with the help of ghost-writer Charlie Connelly, it is when the book recounts the tragic death of fellow jockey Richard Davis and the spinal injuries that left cousins JT and Robbie McNamara paralysed that you realise what dangers these men face every working day.

Happy-go-lucky is not a term that you could ever use for McCoy but he is a remarkable sportsman who dominated his profession like no other. It is an extraordinary career and he is boundless in his praise of those who helped him – his parents, the wonderfully named farmer and trainer Billy Rock, Toby Balding, Martin Pipe, Jonjo O’Neil, his agent Dave Roberts and last employer JP McManus.

One race sums up his determination. It was a three-mile novice chase at Southwell and he was riding Family Business in the seven-runner field, but fell at the 10th fence. He was about to be driven back to the weighing room but noticed that the head lad had hold of the horse out on the track and the field was now reduced to three. He got back on the horse. By now there were only two left. Sure enough they both fell. McCoy had another winner.

For a man driven by records and winners, it was inevitable his retirement was tied to a figure – the achievement of winning title No 20. At the end of this honest and revealing book you are left with the hope that AP enjoys the rest of his life away from the pain, the obsession and the endless hours on motorways.

It is always a risk to say any sportsman’s career is unsurpassable but in the case of McCoy, I doubt anyone will come near his achievements.

Meanwhile here’s to a first title for the luckless but hugely likeable Richard Johnson, runner-up in 16 of those McCoy championships.