The capital’s football clubs have been involved in more moves than Pickford’s. Their tangled web is unravelled in a book which records their colourful histories, and reviewed by ERIC BROWN 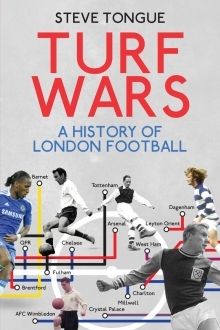 The clubs in question were Fulham and Queens Park Rangers, but rather than a merger it seemed as though Fulham may be swallowed up. The plan was for Rangers manager Jim Smith to take charge of the merged club which would play at Loftus Road. Fulham would supply the chairman in property developer David Bulstrode.

No wonder back page headlines included “Sold Down the River” and “Fulham RIP”.

A week of protests followed and the Football League eventually blocked this latest move in London’s historic turf wars.

London is the most congested football city in the world with clubs competing at a vast array of levels for more than 150 years. So it is hardly surprising that many have moved around to gain financial advantage over rivals.

Woolwich Arsenal, the capital’s first professional club, perhaps made the most notorious move of all. Having tried the turf at Plumstead Common, The Sportsman, The Manor and the Invicta Ground in Plumstead High Street, where 8,000 turned up for the first game against the 93rd Highlanders, the unsettled club eventually found themselves in dire financial straits.

Henry Norris, a former Mayor of Fulham and chairman of the local club, became majority shareholder and eventually chairman of Arsenal while still a director of Fulham. He even issued a cheeky invitation for Fulham to amalgamate and when that was declined he suggested a ground share between the two clubs. This manoeuvre pops up time and again in London’s chequered football history.

Thwarted on both fronts, Norris eventually decided the path to prosperity for The Arsenal lay across the river, instigating probably the bitterest of London’s turf wars, with Tottenham and Clapton Orient horrified about the prospect of new rivals on their patch. Protests went unheeded. The Arsenal’s last game in south London against Middlesbrough was watched by 3,000 people. The first at the new ground in Gillespie Road in September 1913 drew a crowd six times larger who saw Leicester Fosse beaten in an unfinished stadium.

Just over 60 years later a Daily Express exclusive revealed plans for Arsenal and Tottenham to sell their respective grounds and invest in a 75,000-capacity shared stadium at Alexandra Palace. Local residents and politicians, dismayed by the prospect of the possibility of football hooliganism in a quiet suburb, managed to head off that idea.

But turf wars have involved almost all London’s clubs at one time or another.

Queens Park Rangers, in fact, might have merged with Brentford. Charlton and Wimbledon were both forced to leave their homes. Millwall did so willingly but the emergence of Dagenham and Redbridge swallowed up Walthamstow Avenue, Leytonstone and Ilford.

Turf Wars‘ author, SJA member Steve Tongue, is well known as a BBC Radio sports news presenter and a football writer with The Independent and Independent on Sunday. He even had a hand in that London Daily News story of 30 years ago.

Tongue’s exhaustive research of the London football scene stretches far beyond the confines of moves, takeovers and ground shares in a gem of a book which will be fascinating to soccer scholars all over the country.

There’s plenty of room for minutiae, like a look at the first representatives from the capital in Europe. A composite London XI featured in the Inter-City Fairs Cup in 1955 with the players drawn from Spurs, Arsenal, Chelsea, West Ham and Charlton.

And Tongue takes a look throughout at the managerial appointments both good and bad. Chelsea’s panic appointment of Sunday Express columnist Danny Blanchflower could not prevent them finishing bottom of the First Division with five wins in
42 games.

He reminds us Tottenham shook hands with Alex Ferguson only for the Aberdeen boss to change his mind and join Manchester United instead.

Then there’s Arsene Wenger’s surprise appointment by Arsenal after managing in Japan. It was greeted with headlines of: “Arsene who?” Seems strange since he’s been so long part of the football furniture. And it wasn’t too long before he found himself presiding over a turf war as Arsenal struggled to fund his team while completing yet another move from Highbury to The Emirates.

Ironically, the club who set such store by the Tube when they arrived in north London that Norris managed to have Gillespie Road station renamed Arsenal ended up at a ground where the nearest Tube station has to be closed at match times as it could not cope with the number of passengers.

The Turf Wars story in London will probably never end, especially because of the shortage of land and soaring prices. Brentford and Tottenham are just the latest to plan new grounds in a constant search for that greener grass. They won’t be the last.