The Hockey Paper is a beneficiary of serendipity.

When the idea of launching a paper dedicated to hockey was first mooted by two of the country’s best-known hockey writers, the late Graham Wilson of the Daily Express and freelance journalist Rod Gilmour, many people would have laughed out loud at the absurdity of the idea.

Newspapers are going out of business on a weekly basis and here were two seasoned journalists proposing to start a new paper, reporting solely on hockey – a sport that flits in and out of the public’s imagination once every four years. 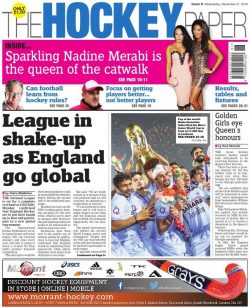 Little could anyone have known that just a few weeks before the paper was due to hit the newsstands, the Great Britain women’s hockey team would take gold in the Rio Olympics and start an unprecedented wave of public interest in a sport that has always struggled to find its way onto the sports pages. The paper appeared on newsstands across the UK for the first time last month and has been gaining readership ever since.

Now The Hockey Paper’s main journalist, Gilmour, explains the rationale behind the launch of a new title. “Together with Graham Wilson, we began talks with David Emery, the former Daily Express sports editor who now runs Greenways Publishing.

“Their stable of print titles, which includes The Golf Paper, The Cricket Paper, The Rugby Paper, has been a real success and we felt that hockey had a place in the market for a standalone paper, with national papers having all but stopped coverage of the sport.”

Amid the planning for the title came the tragic death of Graham Wilson from cancer earlier this year, making the launch of the project all the more a “mission” for those behind it.

The members of the successful Great Britain women’s team have not been out of the media since August, with appearances that range from a scholarly debate on BBC Radio Four’s Woman’s Hour about the media’s portrayal of women’s sport through to a celeb-fest on ITV’s I’m A Celebrity, Get Me Out Of Here.

But is that really enough to sustain a weekly newspaper?

“Hockey is one of the most participated sports in the UK but publications on hockey have been thin on the ground,” says Gilmour.

“We know there is a market and an appetite for a weekly print title. It’s hard graft getting the word out there, but an exciting one to see it grow, the feedback has been very supportive since launch and subscriptions are on the rise.”

There are certainly a raft of hockey writers and pundits prepared to contribute. Regular columns appear from former international player Beckie Middleton, Olympian Simon Mason and EuroHockey commentator Nick Irvine, as well as a host of other hockey writers and regional reporters.

Gilmour is keen to point out that The Hockey Paper will not be a mouthpiece for the game’s governing bodies. “I am treating the sport as I would any other big sport, and that includes asking questions of the national governing body.”

And it is an addition to the media that the chief executive of England Hockey welcomes. Speaking at lastb week’s SJA British Sports Awards, Sally Munday said: “I am keen for journalists to question us and challenge us. It is the only way we can keep moving forwards and it helps keep us on our toes. The new paper will be another way for people involved in the sport to give a point of view.”

Certainly Gilmour is hoping that the hockey community will step forwards with news. He says one of the things that must change is for clubs to start sending news or press releases because, “there is no culture of that at the moment”.

The hockey season runs from September to April, with tournaments and competition finals in May. But it will not be difficult to fill the pages in the off-season, says Gilmour. “There is plenty of hockey colour from across the globe, Brits in coaching roles abroad, the indoor game, which culminates at Wembley Arena in January, next month’s Hockey India League and all the news behind the new-look men’s and women’s squads on the road to Tokyo 2020.”

As Patrick Collins, the SJA President, said, when Great Britain women’s hockey team picked up the SJA Team of the Year award: “A sport which has often struggled to secure the attention it deserves was transformed by the efforts of Kate Richardson-Walsh and her team. Their success demonstrated the enormous appeal of women’s sport. And that appeal deserves to be reflected in the media coverage it receives.”

If he is watching, Graham Wilson would be nodding his approval.

The Hockey Paper accepts pitches from freelancers. An outline idea should be sent to: rod.gilmour@greenwayspublishing.com.