Many will find the prologue to Richard Hughes’s autobiography an agonising read. 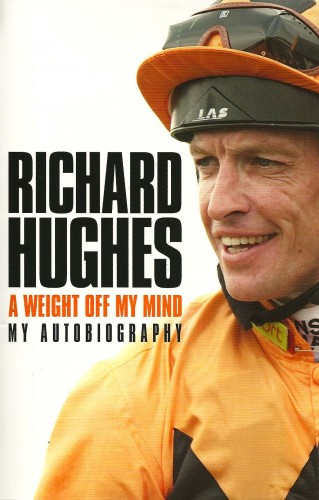 The scene is a traffic jam on the approach to Ascot racecourse in the summer of 1996. Cars and trailers are snaking along at a snail’s pace, while the pavements either side are full of racegoing pedestrians.

Hughes is desperate for a pee. In fact, “desperate” doesn’t adequately describe it.

He’s drunk a bottle and a half of champagne, eaten 10 whole oranges, and taken not one, not two, but 14 “pee pills” in a bid to lose fluid – and therefore weight – before his ride on Oscar Schindler in the Flat season’s summer jewel, the King George VI and Queen Elizabeth Diamond Stakes.

Until this moment, driving in from Newmarket that morning, Hughes couldn’t understand why none of his self-administered treatment had produced so much as a dribble.

Now everything had kicked in. He was in agony. And if he didn’t make it soon, he would have to piss himself.

Then the traffic cleared a little and he managed to get into the jockeys’ car park. He got out of his car and sprinted to the old brick toilet block. By now he was, quite literally, doubled up in agony. It took him all his time to drop his trousers and sit down. And then he peed. And he peed. After he had been peeing for about 30 seconds, the relief was indescribable. Then he fainted.

Ten minutes later, he came round. He was lying on his back on the cubicle floor. He was dirty, wet, and he smelled bad.

So begins A Weight Off My Mind. And so it continues in much the same vein: a revealing and often shocking account of the life and times of one of racing’s most unlikely stars.

The book, written in collaboration with the 2011 Racing Journalist of the Year, Lee Mottershead, is the warts-and-all story of the son of Irish racing legend, Dessie Hughes, from the boy’s start as a seven-year-old professional jockey on the pony racing circuit, through his arrival in England in 1994, and subsequent associations with trainers and owners including Richard Hannon, Prince Khalid Abdullah, Sir Michael Stout, Sir Henry Cecil and, of course, the Queen.

Hughes is never better than when he is talking about horses: from his pony racing ally, Chestnut Lady, to the great Canford Cliffs, and many of the thoroughbreds he rode in between.

But the most compelling part of the book is Hughes’s battle against his weight – and against his alcoholism. He started drinking champagne for its dehydrating effects. But he also drank beer in Newmarket’s most rundown, out-of-the-way pubs, simply because he wanted to get drunk, in private if possible.

It wasn’t long before his behaviour spiralled out of control, taking him down a dark road of excess and addiction, a descent that brought misery to both himself and his loyal, long-suffering wife, Lizzie, the daughter of Hannon. “I thought alcoholics drank from bottles concealed inside brown paper bags,” he says. “It turned out that they came in all shapes and sizes. One of them was a 5ft 9in Irishman.”

His story has a happy ending. On Easter Sunday 2005, Hughes took what he intended would be his last-ever drink, a pint of beer. Thanks to Alcoholics Anonymous, and to his strong Christian faith, so it seems to have turned out. He hasn’t touched a drop since.

If nothing else, this brutally self-aware account – one suspects that telling his story has been additional therapy – might offer hope to others in the midst of similar personal trauma.

But it’s not all about the booze. A Weight Off My Mind also provides an insight into racing itself – whether it be in Britain and Ireland, on the European mainland, or in Mumbai – and why there is “no sensation in the world that compares to riding as a jockey”.

Oh, if you’re wondering – Hughes managed to ride Oscar Schindler that day and the horse came a wholly respectable fourth.