Steve Bloomer was football’s first super star. He scored a record number of goals for England, endorsed football kit including “the boot that never fails to score”, and when the Queen Mary set out on her maiden voyage his image was part of a giant mural in one of the public rooms portraying famous Britons.

His career was spent mostly with Derby County – there was a controversial transfer to Middlesbrough – but he eventually returned to a hero’s welcome, brass band and all, at the Baseball Ground.

Bloomer was renowned for many things – he was also a good cricketer and baseball player – but he was best known for his impeccable sense of timing.

When that let him down, it did so in spectacular fashion: on the eve of the First World War he went off to coach in Germany. Thus, in August 1914, he found himself one of several of Britain’s greatest footballers interned in a civilian camp at Ruhleben, near Berlin. 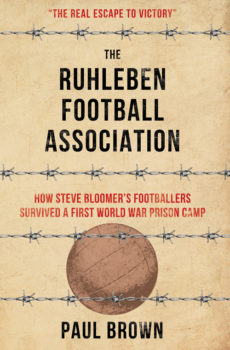 What happened next is a remarkable story, now well told by freelance sportswriter and always impeccable researcher, Paul Brown.

Brown, whose football features have appeared in The Guardian, FourFourTwo and When Saturday Comes, has just brought out The Ruhleben Football Association: How Steve Bloomer’s Footballers Survived a First World War Prison Camp.

Surrounded by barbed wire and armed guards, living in squalor and surviving on meagre rations, Bloomer and others including fellow England internationals Fred Pentland, and Sam Wolstenholme, and John Cameron, the former Scotland international and player-manager of Tottenham Hotspur, found salvation in what they knew best – football.

They bartered for balls, marked out pitches with lime, and formed the Ruhleben Football Association that ran league and cup competitions involving hundreds of players and watched by thousands of spectators.

Ruhleben was a former horse racing track now with some 4,500 men who were crammed into 11 filthy stables. The guards were cruel, food was scarce, and the camp commandant was incompetent. Yet somehow, as this “Great War for Civilisation” raged on, Bloomer and his fellow prisoners, through football, managed to establish a kind of order and normality. Some of them even used it to escape. Bloomer later summed it up: “Myself and many others would not have survived without football.”

Having read the book, I would certainly like to see the movie. Paul Brown’s account of this remarkable enterprise, is, I venture to suggest, the real-life Escape To Victory and worthy of consideration by a filmmaker.