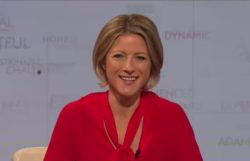 Jacqui Oatley, who describes her appointment as new host of Sky Sports Sunday Supplement as ‘surreal’, has shrugged off the social media trolls who greeted the news with the usual poison.

The broadcaster, and first female football commentator on Match of the Day, replaces The Sun’s Neil Ashton and makes history again as the first woman presenter of a show which has attracted criticism for a lack of diversity.

She is the fourth person to host the show – Brian Woolnough and Jimmy Hill were co-hosts – since its inception in 1999. Sunday Supplement sees presenter and three guests from the world of print journalism sitting informally at a breakfast table discussing the back pages and the weekend’s footballing issues.

Genuinely appreciate the kind messages from colleagues and viewers alike re @SundaySupp. They mean so much. As for the sexist trolls, you chose the wrong target. 17 years in football press boxes means I’ve grown enough layers to laugh out loud. Thanks for the giggles 🤣 #kitchen pic.twitter.com/PHDb7pcbN0

Oatley, a Wolves fan, said: “It means the world to have faith shown in me to host a show which I’ve watched since its inception all those years ago.”

She has continued to be a ground-breaker since those commentator days, winning an MBE in 2016 for services to broadcasting and diversity in sport thanks to her work with Women in Football.

The Athletic has just recruited her for a Wolves podcast and she recently joined Sky Sports News as one of the presenters.

Previous host Ashton, who stepped in when Woolnough lost his battle against cancer, had been in charge of croissants and chat for seven years while he worked for The Mail and then The Sun. He was the SJA sports reporter of the year in 2010.

Announcing his departure on Twitter, Ashton wrote: “It has been a privilege to be able to host a programme that had such a dedicated and fanatical following. I have established a sports media, brand, and image consultancy and I don’t want to be compromised or to affect the credibility of Sky Sports by continuing to host this prestigious programme.”