The Morning Star’s north-east football reporter ROGER DOMENEGHETTI has written his first book, a history of English football media. Here, he outlines the background to the project

It’s Easter Monday, 2012, and there are 17 minutes left of Newcastle United’s match with Bolton at St James’ Park. What had until that point been a fairly dull, goalless affair sparks into life when Newcastle’s young French star Hatem Ben Arfa receives the ball deep in his own half. Fifteen scintillating seconds later he’s scored and the home side are on their way to three points. 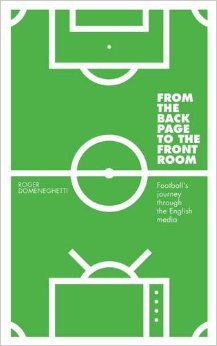 While the Toon Army celebrates one of the goals of the season, a wave of panic washes through the Press Box as those tasked with writing about the game, myself included, aren’t quite sure what they’d just seen. Had Ben Arfa received the ball from Tim Krul or Yohan Cabaye?

Was he in the centre circle or closer to his own goal when he started his run?

How many tackles had he ridden?

Which Bolton player could have (perhaps should have) brought him down and taken a yellow for the team?

We had to wait for the answers. What had caused this panic? Well, due to a power cut, the television monitors in the Press Box weren’t working. Horror of horrors! There were no replays. And there you have it: the media prism through which we experience football has become so omnipotent we almost incapable of consuming football without it.

By comparison, few people actually watch a match live and even those who do will almost certainly seek an interpretation of what they’ve seen from journalists and pundits. Almost everyone’s experiences of the teams they don’t support will also be gained vicariously through the media.

Yet despite this, popular histories of football tend to overlook the huge importance of the media for the sport’s development. There might be a small section here or a chapter there, but no sense that the pair have always been inextricably linked. Likewise, popular histories of the media tend to overlook the importance of football despite the fact its value as compelling content that could be used to increase circulation or viewing figures has always been recognised.

It seemed rather odd to me that no one had set out to explore and examine this relationship that was so vital to the development and success of both. Furthermore, this was a book that I wanted to buy; a story I wanted to read. So I set about writing it myself.

One of the most striking things I found during my research was the manner in which history repeated itself. Every time a new media technology emerged it seemed to join forces with football for the benefit of both. Early coverage of the game in the Press enabled the sport to develop by acting as a communication network spreading fundamental information such as results, fixtures and league tables. In return the sport fuelled the growth of the Saturday soccer specials, with a study in 1913 declaring that “… incomparably the keenest competition in the newspaper world is developed as the result of rivalry to bring out the earliest news of sporting events”.

Fast forward to the early 1990s and football’s reputation was in the gutter while Rupert Murdoch’s News Corporation was in dire financial trouble. Once again English football and the media came together to support each other. Without the money generated through Sky’s coverage of the Premier League, it is highly unlikely that Murdoch would have come to dominate the British media in quite the manner that he has. Would the Leveson Inquiry have happened if the Premier League had stuck with ITV way back in 1992?

Yet the recent bidding war between Sky and BT Sport is merely a repeat of the battle for rights fought by newsreel companies in the 1920s and 1930s, albeit now by combatants with deeper pockets. Watch the grainy footage of those old games, and you could be forgiven for thinking there is a lifetime of difference with the coverage we see today.

Technologically speaking there is, but look more closely at how the story is told and you’ll see the narratives are the same as in any modern highlights package. There are the players filmed coming on to the pitch and meeting the dignitaries; the crowd being led in a rendition of Abide With Me; the goals shown from a reverse angle and in slow motion; managers getting agitated and finally the victorious captain is interviewed after the match.

Also, then as now filmed coverage influenced what was written in the Press. The 1932 FA Cup final was known as the “over-the -line final” because the Arsenal players claimed the ball had gone out of play before Jimmy Boyd crossed for Jack Allen to equalise. The film footage supported that point of view and so came to dominate Press coverage of the game which focused on the footage as much as the game itself.

“Cup Final goal was not a goal. Film proves it – yet it must stand”, declared the Daily Herald. The Manchester Guardian asked the Newcastle manager Andy Cunningham for his opinion. His reply: “From my position I could not see whether it had gone out of play or not”.