It is almost 50 years since the first ‘Rothmans Football Yearbook’ hit the bookshops.

Michael Archer, long time editor of ITV’s On the Ball programme has a complete set but is ready to sell it for a “reasonable offer” which he puts at “something in excess of a tenner per volume.”

He added: “It will be a sad day when I finally come to say goodbye to them but it comes to a point when I’d happily let someone else enjoy them, covet  them and make use of them.” 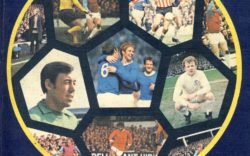 There were other football annuals around when On the Ball launched in the late 1960s but, as Archer says, “nothing with the ambition or detailed research of the Yearbook.

“Rothmans made it possible by backing the idea of an annual that would be the football equivalent of Wisden Cricketers’ Almanack. Brian Moore and I used Rothmans every time we had a query.

“It was like no other book, packed with stats. It was a bit like the wikipedia of football. It became the bible to anyone who was running a football show.”

Archer remained with On the Ball for 20 years before joining Trans World International (now IMG media) and covering other sports. He continued to buy the book, which in latter years has been published by Sky Sports.

“I still kept my collection going,’ Archer said. ‘Although the early ones are well used, they were respected and remain in very good condition.”

Archer says he wants to sell the collection as a set – with the buyer arranging collection or despatch from their home in Wimbledon.

He warns: “It will take several carries to get them into a car. They are heavy.  I will help, of course, but allow plenty of boot space and shelves when you get them home too.  As you can see from the photo, the current volumes now run to the best part of a thousand pages!”

There will be slight respite before the 51st edition arrives. The publication date is being  advertised as October 1, so it will be able to report what is surely the strangest season of recent times.

Michael can be contacted at michael@archers6.co.uk