Former BBC man Adrian Harte is aiming to reach the top of the charts with a new book on rock group Faith No More.

Harte, who was on BBC Sport for two years and also a casual sub at The Guardian in the early 2000s and now works in UEFA’s media and comms department in Switzerland, sees his passion project published next month – a landmark in 30 years of following the US band .

Irishman Harte, who began his career on the The Northern Standard in Monaghan, has been a big fan of the group since his teens and set up the go-to website for FNM fans nine years ago.  He is pictured above with founder member Bill Gould.

But it was more than fandom made Harte want to write the biography. 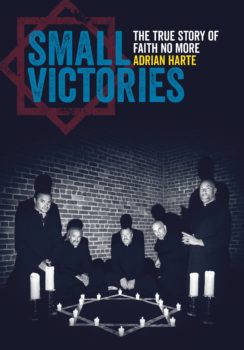 Here, he takes up the story of how and why the book, entitled Small Victories: The True Story of Faith No More, came about:

“Like many reporters who have moved into production or PR, I still felt the urge to write. The site helped with that and also keeping on top of emerging media technologies, but following the release of Faith No More’s comeback album in 2015, I felt a nagging need to tell their story.”

Harte pitched his proposal to publishers in the US and UK in 2017, opting for London-based music book specialists Jawbone Press. He then spent time with the band in their native San Francisco, and conducted over 100 interviews with 40 key figures for the book, writing his 100,000-page tome in evenings and weekends and one two-week stretch in a secluded farmhouse.

The resulting book tells the story of how Faith No More helped redefine rock, metal, and alternative music. The book chronicles the creative and personal tensions that defined and fuelled the band, forensically examines the band’s beginnings in San Francisco’s post-punk wasteland, and charts the factors behind the group’s ascent to MTV-era stardom.

Leading UK rock magazine Planet Rock have already given it a rave review, saying that “Small Victories is a fabulously detailed dissection of the life and times of one of rock’s most idiosyncratic, fractious and gleefully perverse collectives. Revelations abound…”

Indeed, there were surprises for the band themselves, with founder member and bassist Bill Gould saying: “The man has done his research and it shows. It provided me with more than a few revelations… and I’m in the band.”

Small Victories will be published by Jawbone Press in early September. It is already available for pre-order on Amazon, WH Smith and Waterstones.