The Premier League season is about to start, with the unlikely phrase “defending champions Leicester City” about to be used in thousands of reporters’ preview copy. ERIC BROWN reviews a book which charts a season which defied the 5,000/1 odds

Some said it was the biggest upset in English football since Brian Clough dragged Nottingham Forest out of the second division and they metamorphosed into League champions a year later.

Others with longer memories claimed it to be the greatest shock served up in England since Pak Doo Ik’s goal for North Korea sent Italy packing from the 1966 World Cup.

However you view it, Leicester City’s coronation as Premier League champions will still raise eyebrows when the record books are studied many years from now.

The facts are simple. In April 2015, Leicester were languishing seven points adrift at the bottom of the Premier League and seemingly heading for relegation. Exactly 12 months later to the day, they moved seven points clear at the top. They were crowned champions on May 2. It truly was, as Dave Bevan has chosen as the title of his book, Unbelievable.

During that year, Claudio Ranieri had replaced Nigel Pearson as manager and apparently waved a magic wand. His spell cursed pre-season favourites Chelsea, his former club where he had earned the well-deserved nickname “Tinkerman”, as well as the billionaires of Manchester City, Arsenal and Manchester United, while spreading fairy dust on his own players’ boots.

At the start of the season Leicester were 5,000/1 title no hopers with the bookmakers. Pundits wrote them off. In the Daily Mail’s pre-season pull-out 16 journalists and former players gave their predictions. All 16 gave the same top four in varying order. Ten of them agreed that Leicester would be relegated. 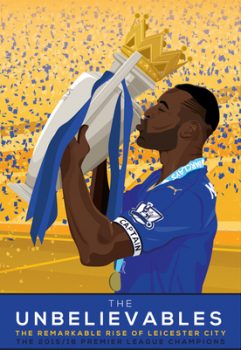 Nine of 11 Guardian writers picked Leicester to be relegated.

Yet nine months later, Leicester were top of the pile and their players Jamie Vardy and Riyad Mahrez were household names.

Vardy’s pace, the trickery of Mahrez, Danny Drinkwater’s midfield contribution, and rocklike defence from Wes Morgan and Robert Huth allied to N’Golo Kante’s all-round talents led the way. But all of City’s players were heroes as they cut a swathe through some of the richest clubs in the land.

Season-ticket holder Dave Bevan, who writes for the Guardian and Daily Mirror, watched every Leicester City game home and away during the most incredible season in Premier League history. From the hot August day when City beat Sunderland 4-2 as England secured the Ashes against Australia, until May 2, when Spurs’ failure to beat Chelsea meant Leicester could not be caught for the title, he describes a campaign that moves from optimism to appreciation, to disbelief, to hope and finally hysteria.

Unbelievable it was. Just how unbelievable will probably not be appreciated for at least another 20 years.