In the increasingly challenging world of sports book publishing, an Olympic Games, especially in those years which end in “6”, offers an opportunity for publishers to try something a little different, reaching out to a “crossover” audience, with the chance to use a cover that has an eye-catching swastika or maybe even a picture of Hitler himself. Eighty years on from those notorious Berlin Games of 1936, and the fascination with Nazi Germany lingers enough for it to be pursued even by sports writers. 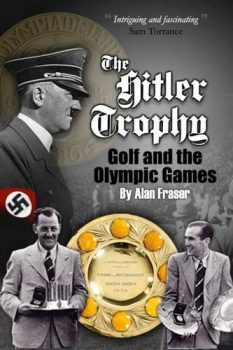 We’ve all seen the pictures of an England football team, right arms raised in Nazi salute, when playing a “friendly”against the Germans in the 1930s, while the accounts of Jesse Owens’ noble response to the fascists and racists at the Berlin Olympics are legion and well-known.

In the recently published The Hitler Trophy, though, Alan Fraser does what all good journalists always seek to do: they tell the reader something they didn’t know already.

With golf back on the programme at the Games at Rio, Fraser’s book is another timely reminder of how the Olympic leadership embraced the Nazis, with the tale of a barely noted episode in the game’s, and the Games’, history.

Officially, golf was last played at the Olympic Games in 1904, which according to information buried away on page 1158 of my old Wallechinsky, means that Canada’s George Lyon’s reign as “Olympic champion” will have lasted 112 years, until the gongs are handed out at Reserva de Marapendi on Sunday week.

As Fraser notes in his book, Lyon was an accomplished sporting all-rounder, a one-time national record-holder for the pole vault – a claim which the 2016 men’s or women’s Olympic champions are unlikely to be able to match. The Canadian might have retained his title when aged 50 at London’s first Games in 1908, but the tournament was scrapped when British players refused to take part, with an ambivalence towards the Olympics which has echoed down the years to today’s players, and following organisational chaos which Fraser describes as “yet another Olympic fiasco”.

And that was that for golf and the Olympics for more than a century.

Or so I, and most people, thought until Fraser dug out the detail of a tournament held at Baden-Baden after the Berlin Games, and staged with the personal sanction of Hitler himself. The Fuhrer was not known to be a golfer (Hitler “was to golf what Tiger Woods is to painting” is how Fraser puts it), but maybe he knew that the Baden-Baden clubhouse had rules which will have excluded anyone the Nazis didn’t like the look of…

In any case, Hitler put up the trophy, an unattractive platter, which because of its provenance became a bit of an embarrassment in later years for the English Golf Union, who acquired it after the team of Arnold Bentley and Tommy Thirsk won the two-day, four-round event.

As Fraser tells it, Hitler was so enthused by the success of the Berlin Games that he ordered tennis, horse racing and golf events to be staged at the Black Forest spa resort in late August 1936. The actual connection between these events and the Olympics, though, is a tad tenuous, apart from the fact they were staged in the same country in the same year as the Games. Fraser himself describes them as only “quasi-Olympic” events.

But then, for golf at the Olympics, it was ever thus.

As the sub-title, “Golf and the Olympic Games”, Fraser’s book is a wide-ranging account, to provide the context in which the Hitler Trophy was contested. This includes a look at golf’s Olympic debut at the 1900 Games in Paris. “Most competitors turning up for the golf competition at Compiègne Golf Club 50 miles north of the centre of Paris at the start of the 20th century had not the faintest idea that they were taking part in the Olympic Games,” Fraser suggests.

In an era when the IOC wanted to block women from competing at the Games, Abbott, Fraser tells us, had thought she was entering a a nine-hole amateur championship of Paris.

“Those same competitors departed equally unaware that they had played in the first Olympic golf event. Indeed, somewhat bizarrely, though almost understandably when one considers the chaotic nature of the organisation, Peggy Abbott, the women’s golf champion, died in 1955 still ignorant of the fact that she had been an Olympian and oblivious to her status as the first American woman to win an Olympic gold medal.”

There seems little chance that any of the 120 men and women players teeing off in Rio next week won’t be aware of their part in what has become The Greatest Show on Earth, though with golf only guaranteed its Olympic place through to Tokyo in four years’ time, they will need to deliver up something special to establish their game alongside other sports, or what Rory McIlroy has called “the stuff that matters”.