It is one of the most famous pieces of sporting cinema newsreel. A grainy black and white image and Bob Danvers-Walker’s commentary… “Into the final straight with victory in sight for Devon Loch. He’s clear away from ESB and Gentle Moya. Only 40 yards to go … Devon Loch can’t lose … but he’s slipped … he’s down … ”

[Click here to view the full Pathe News film of the race on YouTube. Quality is not so good, and neither is the soundtrack…]

And so 100/7 shot ESB and his jockey, Dave Dick, were gifted the 1956 Grand National within a few strides of the winning post.

The Times reporter – “Our Racing Correspondent”, no bylines in those days – summed up the mood perfectly, describing “the disappointed crowd as they stood in small disconsolate groups afterwards. They had been robbed of a delightful result at the height of their enthusiasm.”

More than half a century later, the mystery of why the Queen Mother’s horse went down in such sensational circumstances on the flat run-in is still debated when racing fans of a certain vintage start talking about the National.

There have been plenty of theories. Many have asked Devon Loch’s jockey, Dick Francis, what he thought had caused such a remarkable collapse. Many more thought that Dave Dick might have the answer. After all, he had Devon Loch and Francis in sights, albeit horse and rider were fast disappearing into the distance.

Not many people, though, thought to ask George Milburn. He was on board Gentle Moya and, in his first Grand National ride, suddenly found himself catapulted from a distant third into second place.

But now freelance racing journalist Chris Pitt has discovered what Milburn thought, and the chapter forms part of Pitt’s entertaining new book, Go Down To The Beaten: Tales Of The Grand National.

Milburn picks up the story: “The following season, Devon Loch ran four times, won twice and was second twice, all in races of two and a half or three miles. The following January, I rode Green Drill in the Mildmay Memorial Chase at Sandown. Dick Francis had retired and so Arthur Freeman rode Devon Loch that day.

“He finished fourth and I was seventh or eighth, but quite close up, five lengths behind Devon Loch. We’d passed the winning post and were pulling up when he did exactly the same thing he’d done at Liverpool. Not as bad, but he went down and then got straight back up on his feet.

“I don’t think anyone noticed from the stands because we’d pulled up behind a building at the side of the track, just after the winning post.

“I think it was cramp, a muscular problem that overtook him when he was getting tired. They were both long distance races, Liverpool four and a half miles and Sandown three miles five furlongs.

“I don’t think it had anything to with crowds or shadows or anything like that. I think it was purely some form of cramp, a muscular seizure that he got when he was fatigued. After that Sandown race, he never raced again.”

It is nuggets such as this that makes Go Down To The Beaten such a great read, even for – perhaps especially for – people like me whose only annual bet is on the Grand National.

There are the horses, almost always the also-rans. Pitt tells us about Wyndburgh, a three times runner-up; Ormonde Tudor, who romped his way through 11 different trainers; and Elsich, who fell in almost every race he ran. “When I got him, he was like a giraffe, long neck, nose in the air, unbroken, no mouth. You just had to trust to luck that he saw the fences,” said Elsich’s jockey, Bill Balfe.

Then there are the jockeys: Tony Grantham, the first Royal jump jockey; Clive Chapman, who became a household name thanks to the Hamlet cigar ads; Brod Munro-Wilson, “a rogue in brogue”, who “liked to ride like a gentleman, not a monkey up a stick”; and Peter Cullis, who on the morning of the 1973 Red Rum and Crisp National woke up blind in one eye, yet still got round on no-hoper Mill Door.

Of course, there is the race itself. We go to the first televised Grand National, in 1960 after years of negotiation (the original commentators were Peter O’Sullevan, Clive Graham and Peter Bromley and the programme was presented by Cliff Michelmore, who stepped in at the last minute for David Coleman, who was suffering from appendicitis).

There is the 1964 race when Purple Silk, a 100/6 shot from the Lincolnshire Fen country, was pipped at the post by Team Spirit in one of the most thrilling of all Grand National finishes. 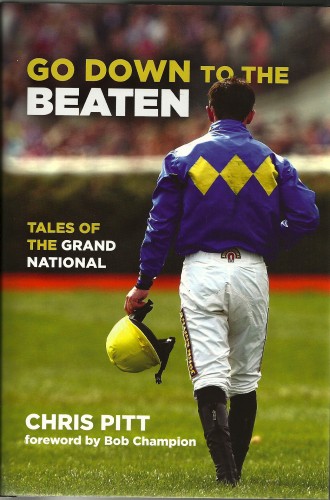 And the 1993 void race, when “horseracing hurled a brick through its own shop window”, together with the 1997 “bomb scare” National that resulted in a Liverpool free-for-all.

In fact, Pitt has covered every Grand National since the Second World War and has managed to distil the magic of the race through the eyes of the jockeys themselves, mostly men who, for one reason or another, never did manage to reach the pinnacle to which every jump jockey aspires.

The book ends with the heart-warming tale of how AP McCoy, winner of more races than any other jockey in jump-race history, finally broke his Grand National hoodoo at the 15th attempt. It is a fitting finale to the story so far.

Go Down To The Beaten: Tales Of The Grand National by Chris Pitt (Racing Post, £20).