I am not often asked to review books for this website. Might have something to do with me running a sports book publishing business, I suppose. 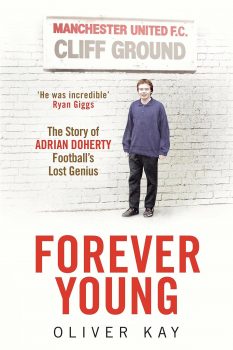 As a publisher of sports books, I read the books in a different way from most. I’m looking to see if they are commercial, if there are errors, how well they’ve been edited, that sort of thing. And it often robs me of enjoyment.

But when I saw on Twitter an excerpt from Oliver Kay’s story of Adrian Doherty – Forever Young – I sent an immediate text to the site’s editor asking if I could go ahead and review it.

Without reading the excerpt, it was obvious this would not be a normal football book. You can’t have relatives who live in Manchester and are United fans without knowing the Northern Irishman was once considered a better prospect than Ryan Giggs – something with which the Welshman concurs, although the book’s readers had better get used to seeing the player-turned-coach described as “Ryan Wilson”.

Kay, the chief football correspondent of The Times, has produced an absorbing book about a footballer who never prospered as a player alongside Giggs, the Nevilles, Scholes and Beckham.

Doherty’s fledgling career was ended by a cruciate knee ligament injury, but this is a story about much more than another player with dreams of the big time who sees them cruelly dashed. Kay describes how Doherty would play in the A team on a Saturday morning, give away his two Old Trafford complimentary first-team tickets to supporters, and instead spend the afternoon busking with his guitar on Deansgate.

I know of no other footballer who has done that. Most conform, as Alex Ferguson wanted his United youngsters to do, rather than turn up in an old jumper and trainers, taking their guitar to training, seek out open-mic music clubs and make up their own songs and poems. Liverpool and Wales midfielder Joe Allen keeps chickens, but Doherty’s non-comformity was in a totally different league.

Doherty dabbled in Gnosticism, read voraciously and seemed to have no ego whatsoever until he got on to the pitch.

Kay poses the question as to what might have happened had Doherty’s knee injury been properly diagnosed and operated on quickly, which is still an issue between the family and the club. And is likely the reason why Sir Alex Ferguson communicated with Kay by letter rather than a face-to-face interview.

Kay also writes about the feral behaviour of United’s young apprentices in those days, the forfeits and bullying that the younger ones endured.

Kay spoke to Doherty’s family and friends and his contemporaries – Gary Neville is one former United player who was willing to give Kay an interview – some of whom suffered similar injury problems and whose careers also petered out. He paints a picture of a young man who was not truly in thrall to football, although he wanted to play at the highest level.

After Doherty left United – who, it’s fair to say, did not give him a true opportunity to show whether or not he had recovered from the injury – he played briefly at Derry City, where his father Jimmy had also played, before taking a series of menial jobs in order to pursue, but without any great urgency it seems, his music.

The story ends in tragedy because in 2000, when working in The Hague, Doherty fell into a canal. He was rescued but never regained consciousness and died, aged just 26.

Kay was done Doherty’s story justice. It is the sort of book that deserves to win prizes.