BRUCE MILLINGTON, the Editor of the Racing Post, has gone all sentimental after reading James Lambie’s book on the late lamented Sporting Life 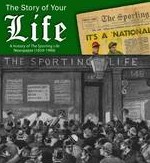 It was like entering another world. The noise! Never mind general office hubbub – this was full-on mayhem.

The time: autumn 1986. The place: the London offices of The Sporting Life.

I was 19, nervously preparing for my first casual shift on the racing results desk, a chance to see if I had any hope of cutting it in newspapers.

From the first moment I fell in love with the place. It was fun, lively, unpredictable and full of characters. There was a guy on what turned out to be the greyhound desk singing These Boots Were Made For Walking very loudly as he scribbled something on a piece of paper.

For reasons unknown he had a toy policeman’s helmet on his head (I later discovered the reason was simply that he was an extremely immature human being). People were chatting non-stop, laughing and joking. Two men staggered in looking like they’d had a good drink. They were told the name of horse that everyone had had the word for.

One sat down, dialled a commentary line and relayed the latest state of play to his colleague/drinking pal, who proceded to smash a wooden ruler on the desk like a jockey trying to get his mount to accelerate. The horse won and they hugged each other and cheered loudly.

In time I was lucky enough to make this extraordinary place my permanent work location. And in 11 years, I never once felt like it was anything approaching work.

My first job, as a greyhound reporter, was ridiculously cushy. I had every weekend and every Wednesday off. I got eight weeks holiday (although you had to forget the existence of bank holidays) and the hours were 10.45am-5pm with between two and three hours in the pub. You had to go dog racing a couple of times a week as well, but I was doing that anyway. It was awesome.

I used to say to the older guys that such a blissful working life could never last. They’d say: “Stop worrying. The union won’t stand for any changes.”

But gradually the inevitable changes came, although it was still a pleasure to work for The Life and, besides, the staff were not adverse to stepping up the pace when shown the whip.

Team spirit on the paper remained sky high. Every night in the Stab, the pub beneath the offices, dozens of staff would gather, drink heavily, get locked in, drink some more, then drift off into the night. It was some place, the Stab. One night a guy from accounts poured a pint over the head of one of Fleet Street’s most respected sports writers after a drunken argument.

The following morning the poor guy was petrified and asking colleagues what he could do to save his skin. He was advised to buy the hack the most expensive bottle of Scotch he could find and give it to him in the pub that evening, which he did.

“What’s this for?” asked the victim of the soaking, clearly oblivious to the incident ever having happened.

Another time, a staff member came in and called the council to complain of mice in his house and demanded they did something about it. So his colleagues got one of the secretaries to call later that day, pretending to be from the council. “We’ll send someone round first thing in the morning,” she told him. “But please ensure all your furniture is out of the house by the time we get there.”

So he made an excuse about not feeling well, rushed home, cleared the downstairs of its contents and stuck it in the garden. That night it bucketed down with rain.

The next morning, the poor sod, too tight to make private calls from his home phone, stormed into the office, called the council and issued an almighty bollocking for their no-show, only to be told no such arrangement had been made and that it took weeks for them to get round to sorting out such matters.

Happy days indeed, until the paper’s untimely death in 1998. I was only there for the last decade and had heard numerous tales of how it was even better in years gone by.

Thankfully, there is documentary evidence of every fascinating moment of the paper’s 139-year history in the form of the recently-published The Story Of Your Life, a magnificent work by James Lambie, the paper’s long-serving northern correspondent.

It’s apparently taken Lambie most of the 12 years since the Life’s sad demise to research and write it, but the level of detail is so impressive that one can easily understand what took him so long. From the glory days to the bitter end, this is an epic story that is well worth every penny of the £25 cover price (troubador.co.uk/matador) and I’m fairly certain that’s the case whether or not you were fortunate enough to have worked for the Life.