What were you doing on the 1 October 1988 just before dawn broke in England? Personally, I was sitting in a friend’s house drinking beer with a group of fellow hockey players from my local club, Pelicans Hockey Club in King’s Lynn. 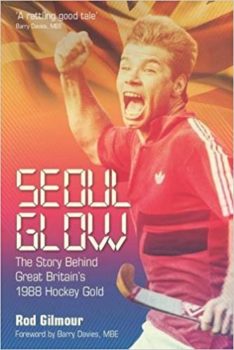 Among the cohort of hockey-playing friends was one Danny Kerry, who would later go on to lead Great Britain women to an historic first hockey gold medal at the Rio 2016 Olympic Games. The significance of Kerry’s presence in the room that day is because we were gathered to watch the Great Britain men’s team make their own history as they beat West Germany 3-1 to win gold at the 1988 Seoul Olympics.

The match, which West Germany were widely expected to win, prompted wild celebrations in England and propelled members of the team into household-name status. Ask anyone over the age of 35 to name a famous British male hockey player and they will usually reply Ian Taylor, Imran Sherwani or Sean Kerly. It was also the game that caused the magnificent Barry Davies to utter the immortal line: “Where were the Germans? But frankly, who cares.”

Using interviews with most of the team, along with references to the pre-eminent hockey journalists of the era, Gilmour has weaved together the story of how a tough, uncompromising team manager and a savvy and technically brilliant coach came together to lead the team to Olympic gold almost despite the system, rather than with the system’s support.

The late Roger Self, had no time for niceties and his methods of coaching and man-management would fail every PC test of current times. The passage where Self continuously whacks a player across the legs with a corner post just as the player is about to shoot, is wincingly honest

Gilmour, who has also penned Shot and a Ghost: a year in the brutal world of professional squash, and writes for The Hockey Paper and a number of national daily newspapers, has an energetic style of writing that brings the characters in the story to life, warts and all.

We learn how the manager, the late Roger Self, had no time for niceties and his methods of coaching and man-management would fail every PC test of current times. The passage where Self continuously whacks a player across the legs with a corner post just as the player is about to shoot, is wincingly honest.

His method of testing players’ mettle when it came to showing resilience were unusual and in the case of one goalkeeper, Tim Gregory, just plain cruel. But, as David Faulkner, currently performance director for women’s football at the Football Association, says: “He embedded a level of resilience that we could deal with any setback… The resilience levels he put into us were just staggering.”

The interviews with the players are informative and, 30 years on, they are able to give perspectives that will have developed over time. It is clear that Kerly was a far from easy team-mate, with several references to arguments or physical incidents where Kerly was at the centre.

But, as the German defender Carsetn Fischer revealed to Gilmour, it was Kerly’s antagonistic attitude that set him apart: “He was crazy, tough, and you were in mortal danger some of the time because he hit the ball so hard. He used to get angry and I would try to get under his skin. We were enemies until the game finished.”

Seoul Glow stretches across more than just the Olympic Year. There are insights into how the players first took up the sport – Stephen Batchelor giving up a potentially lucrative tennis career for example, as well as many pages devoted to some of the problems a group of amateur players encountered as they tried to balance work and hockey.

One of the most revealing sections looks at how second-choice goalkeeper Veryan Pappin managed to stay motivated when he was always going to be warming the bench for Ian Taylor. In a rare moment of human kindness, Roger Self put Pappin on the pitch for the last few minutes of the final to ensure the keeper received a gold medal. It is a heart-warming story that Gilmour draws out with minimum sentimentality.

They were whisked into a television studio and given champagne but then the rot started to set in. A few months later, Kerly was playing Dandini in Cinderella at a Christmas pantomime

There is a sadness to the story too. In the book, Kerly recalls the excitement created when the team arrived home from Seoul. They were whisked into a television studio and given champagne but then the rot started to set in. A few months later, Kerly was playing Dandini in Cinderella at a Christmas pantomime. “When you start selling yourself as a prize bull, I found it uncomfortable… It was a tough lesson to learn about my real value… It’s hard to be defined by an event.”

Gilmour ends the story looking at how the gold medal changed hockey in the UK. There are sections that will make uncomfortable reading for the game’s administrators of the time. The failure of the hockey association to capitalise on the success, the fleeting moment of fame for the players, the creation of a new national league – which was far from universally popular. It might have been 30 years ago, but Gilmour’s underlying message is that the gold medal in Seoul had far-reaching, usually unintended consequences. One passage, for example, outlines how a young student – Hannah MacLeod – was inspired to take up hockey when Stephen Batchelor visited her school. As MacLeod is now an Olympic gold medallist, those consequences have continued to be felt.

If there is one criticism of Seoul Glow it is that it is a hockey book aimed at hockey followers. There are references to the hockey association and aspects of the game that would baffle someone picking the book up merely out of interest. But, once the reader has understood the differences between playing for England and playing for Great Britain; that Bisham Abbey is the home of England Hockey; and worked out that Teddington, Hounslow and Southgate are hockey clubs, then he or she can settle back and enjoy a sporting adventure that could have been lifted from the pages of a Boy’s Own manual.

The story behind ‘History Makers’, Illustrated Sports Book of the Year