The man with the golden voice almost lost it on Monday night when master of ceremonies Jim Rosenthal found himself centre stage at the 2019 British Sports Journalism Awards, sponsored by the National Lottery and Canon.

Rosenthal is a sublime broadcaster, able to gather together a room full of journalists – let’s face it we can be a tad on the rowdy side occasionally – and gently shush us back into order. He has also become Mr SJA at both the journalism and the sports awards, and a very good friend to the association, as well as being a consummate professional.

So it made perfect sense to suggest him as a recipient of the prestigious Doug Gardner Award given for services to sports journalism and to the SJA.

There was just one problem. Rosenthal is a stickler for dotting every i and crossing every t, which meant presenting him with a false script but a believable alternative scenario. A ringer in fact.

Somehow event organiser James Green and SJA awards chair Mary Fitzhenry managed to come up with the right answers, so much so that Rosenthal looked genuinely stunned as President Patrick Collins read the citation.

The room at the Westminster Bridge Park Plaza Hotel rose almost in unison before being treated to a montage of broadcast clips. Then, just as Rosenthal expressed regret that wife Chrissy and son Tom were not there to see the award, they appeared from the back of the room for an emotional reunion. 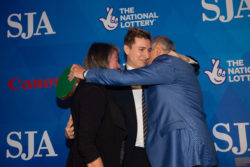 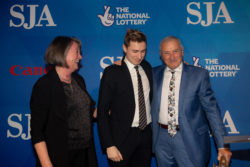 Rosenthal is busier than ever these days and he has a gig coming up which is all about friends. He is teaming up with Pat Murphy and Nick Owen for an evening of chat at the Glee Club, Birmingham. It is sure to be a treat.

No time like the present – get booking now for Three Amigos in conversation – @rosenthal_jim @nickowentv and @patmurphybbc – mates for 45 years, on stage together for the first time @GleeClubBham Not to be missed https://t.co/huisp9RGc0