It was a year of new awards, new winners and a year where cricket took the plaudits in the broadcast section of the SJA British Sports Journalism Awards, sponsored by the National Lottery and Canon.

For the first time, SJA members were invited to vote for their Sports Pundit of the Year, with Sky Sports’ Gary Neville a popular winner ahead of Nasser Hussain and Alex Scott.  He sent a hilarious video message while preparing for Monday Night Football with his comedy partner Jamie Carragher from Anfield.

Neville joked that Carragher thought SJA stood for Scouse Journalism Award and he had won it. In turn, Carragher poked fun at Neville’s close friendship to Matt Dickinson of The Times and suggested that the arrival of The Athletic had killed journalism. It’s worth a watch.

There was no surprise to see Ben Stokes feature in more than one winning entry and the dramatic scenes at Lords dominating many of the awards, with Sky Sports and Sunset & Vine winning the Television / Digital Live Event Coverage for the Cricket World Cup Final and BBC Radio 5Live winning the Audio / Radio Live Event category with BBC Somerset and BBC Asian Network taking silver and bronze for their cricket coverage.  Sunset & Vine’s Cricket on 5 – Ashes Headingley Final Day was also awarded Gold in the Television / Digital Show category.

A regular in the shortlist for Sports Commentator of the Year, 5 Live’s Mike Costello followed up his silver by going one better describing it as a privilege and an honour to win the 2019 award having flown in from Las Vegas following Tyson Fury’s momentous win over Deontay Wilder. 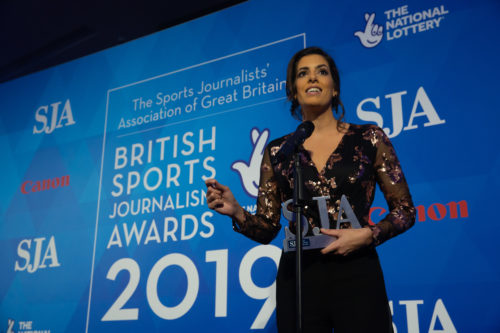 A shocked and surprised Christina Macfarlane (pictured above) became the first woman to receive the prize for Broadcast Journalist of the Year.  The CNN reporter was described by the judges as “a presenter who’s had an extraordinary year. There were some fabulous exclusives when she displayed tenacity and confidence under pressure.”

Comedian Adam Hills took to the stage after winning the Television/Digital Documentary of the Year for Take His Legs, with Noah Media and talked about the ability sport has to change people’s lives and society.

Whisper’s Steve Jones sent a video message from a beach as he was named Sports Presenter of the Year in an always hotly contested category.

The future is bright for the industry with all those shortlisted in the new Ones to Watch category invited to this year’s event with the BBC Radio 5Live’s Emma Saunders awarded gold for on air broadcasters and Sumbal Syed from BBC Sports News winning in the off air section.

There were jubilant scenes on stage at the end of the night as talkSPORT became the inaugural winners of the Sports Network of the Year award.  Head of talkSPORT Lee Clayton praised fellow broadcasters for upping the game in terms of sports coverage this year. He also described his first year in broadcasting as an “amazing adventure learning the dark arts or radiocraft”.

The SJA’s head of broadcast judges Faye Carruthers said: “It was a pleasure to look around the room and see many familiar faces as well as many new ones who wanted to celebrate the wonderful work that’s being produced across the industry.  New awards were well received and with the highest number of entries we’ve ever had, and an incredible standard set, I’m looking forward to next year’s event already!”