Play the Game 2011, the annual international sports conference, is to be held from October 3 to 6 at the German Sport University Cologne, with this year’s theme  “bringing change to the heart of sport”. 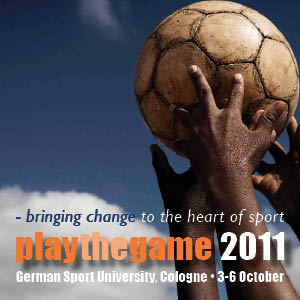 A record number of around 150 speakers declare have been signed up, offering four days of potentially headline-making copy, across a range of themes:

The organisers promise some programme highlights:

The current troubles in world football’s governing body FIFA and the widespread corruption on and off the sports pitch are on top of the Play the Game 2011 agenda. Last week Jerome Champagne, who until 2010 was Sepp Blatter’s right hand in international football diplomacy, agreed to speak at PLay the Game.

UEFA’s William Gaillard, Senior Advisor to the UEFA President Michel Platini, will discuss the current challenges to the integrity of football, and founding WADA President Richard Pound from the IOC will launch a serious warning to sport if it continues along the current path.

Looking ahead towards 2014 and 2016, Brazil’s World Cup winning national captain Raí takes an independent look at what will happen to his home country and its sports life when it has to host the two biggest events in world sport, the FIFA World Cup and the Rio 2016 Summer Olympics.

Prof Arne Ljungqvist, head of the IOC Medical Commission and vice-chair of WADA, is among the speakers on gender in sport. Also the Director General of the WADA, David Howman, will be present to face a number of challengers ready to debate the upcoming anti-doping reforms: investigative journalist Hajo Seppelt, anti-doping scientists Perikles Simon and Wilhelm Schänzer as well as the General Secretary of European Athletes Association, Walter Palmer.

The Special Adviser to the UN Secretary-General on Sport for Development and Peace, Wilfried Lemke, will stress the need for strengthening grass-root sport together with representatives of the EU and ISCA.

The results of various scientific surveys of great interest to the public will be revealed, including the world’s biggest survey on the sports content of the newspapers, International Sports Press Survey 2011, is an initiative by Play the Game which involves research teams in more than 20 countries worldwide, coordinated by the German Sports University Cologne.

The Danish Institute for Sports Studies and the European Venue Management Institute is carrying out a survey into the use of big stadium projects when the mega-event party is over: Are there too many white elephants in sport? And Werner Pitsch from the University of Saarland discloses his research into the extension of match fixing in German soccer.

And national radio broadcaster Deutschlandfunk celebrates Play the Game 2011 with a one-day seminar on sports journalism and recent German sports history. The seminar takes place at the radio headquarters in Cologne, offering an excellent programme, translation service and meals, and it is free for all Play the Game participants.

Read more about the 150 speakers, the conference programme, the extra seminar and registration at www.playthegame.org/2011

Registration is necessary to attend the conference, with a 600 euro fee for the full four day conference package (meals included) and the extra one day media seminar. It is also possible to register for one or two days.

For more information or questions, email the organiser jens@playthegame.org