Does football cross the (white) line too often on drugs, yet get an easy ride from not only the FA but also football reporters? NORMAN GILLER thinks so

Monday’s Dispatches on Channel 4 – misleadingly called “The Truth About Drugs in Football” – was lacking in substance, and not only the illegal substances they were supposed to be exposing. But at least they tried to look under the carpet of football, unlike newspapers that for too long have turned a Nelson’s to the seedier side of the game. 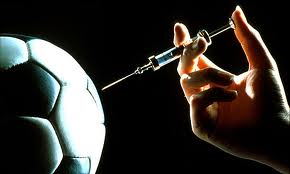 The programme fell way short of the publicity hype that suggested we were going to have major players named and shamed, but there was enough evidence to show what we all know: drug-taking is rife in the game, certainly the recreational stuff and no doubt the performance-enhancing kind as well.

Later we discovered that virtually every gold medal-winning performance by athletes from East Germany was a triumph for the laboratory over the training track. It turned me off athletics to the point where these days I am suspicious of any world record, which is sad and something of a slur on those fine athletes who are clean.

Today, “Fleet Street” is quick to jump on any athlete caught taking drugs or missing tests – Christine Ohuruogu is a high-profile example. But where is the same intense monitoring of footballers’ “methods”?

Who is going to be the first reporter to identify the England striker who failed a drug test when abusing testosterone?

The team doctor of Bayern Munich since the early 1970s, according to an interview given by Paul Breitner to a news magazine nearly 20 years ago, Müller-Wohlfahrt had the entire 1974 West German World Cup-winning team on steroids – for which there was no testing in international sport at the time.

Müller-Wohlfahrt says he uses cockerel combs and goats’ blood infusions today. But surely the various potions and injections Müller-Wohlfahrt uses on his clients, including Activigen (which is banned from use in the United States), or the British football club doctors who have adopted similar methods, are worthy of in-depth investigation by our newspapers’ football reporters?

I am out of the Lord Coe school: zero tolerance to drugs, in whatever sport. Maybe I am old fashioned, and I confess that I would not even know how to take a drug. “Things go better with Coke” to me remains just an innocent slogan for a fizzy drink.

My support goes to David Howman, director general of the World Anti-Doping Agency, who believes the pussyfooting FA should name all players found to have used banned drugs of any kind.

New Zealand barrister Howman suggested in an excellent interview with the Daily Telegraph that the FA would do well to make their doping detection programme fully transparent.

He told the Telegraph’s Andrew Warshaw: “Why does there have to be so much secrecy? When sports people get involved with substances that are ordinarily part of a criminal justice programme, what is so special about sport that it ought not to come into the public arena?

“There will of course be times when revealing a player’s identity might seriously compromise his rehabilitation, particularly if he has a serious drug addiction or a medical condition. I accept the need for confidentiality in such cases.

“But in such a circumstance, why not announce the positive drug test, then publish a statement explaining why the player has not been named? If you are going to withhold a player’s identity, then you should at least provide the justification.”

He added: “The FA should not allow a perfectly good programme to be tainted by secrecy. If a player needs to be protected, then give us the reason why. Don’t give the public the chance to suspect the worst.”

The FA says they keep the identities of footballers found to be taking drugs secret so they can be helped to beat any habit out of the glare of publicity. This old cynic thinks they exercise anonymity to protect the image of the game.

And why would they apply such anonymity to those caught using performance enhancing substances?

They should name them not to shame them but as a warning to others that only mugs touch drugs, and if they do they will be exposed. It just might put the younger players off taking the illegal substance.
Now there’s suggestion with real substance.

ANOTHER VICTOR MELDREW RANT: What on earth is happening to the standards of newspaper reporting?

There was evidence of yet more reckless coverage following what appears to be the manslaughter of a supporter at Wembley when England played Wales in their Euro 2012 qualifier.

Cardiff City have reported The Sun, the Mirror and the Mail to the Press Complaints Commission over stories they published surrounding the incident, in which Michael Dye lost his life.

I winced when I read the reports that were jumping to all sorts of assumptions on threadbare evidence. I was taught in my first weeks in local newspapers that you never, never, never write conclusions ahead of an inquest or police inquiry. Whatever happened to sub judice?

Yes, I know I am a crumbling old ruin in need of a preservation order, but I speak for my generation of journalists when I say we are appalled by the standards of today’s loose and legally dangerous reporting.

As for the libels I see committed every day on Facebook and Twitter, it makes this old groaner cringe.

Those people using social networks to pour vile abuse on celebrities – football personalities in particular – be warned: The ambulance-chasing-injury-lawyers are switching their attention to the internet for easy pickings.

Think before you type.

One thought on “Can football answer questions of substances?”