From the Mayor of London’s office 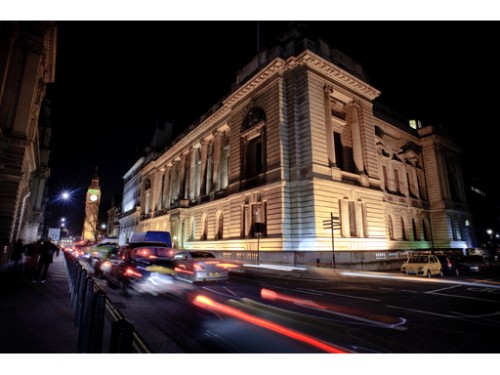 The London Media Centre was opened yesterday, located in the heart of Westminster at One Great George Street, right next to Parliament Square and the Olympic Beach Volleyball venue at Horse Guards Parade. It is open to both accredited and non-accredited media, with 600 specially organised events laid on to help the 6,200 media representatives report back to audiences from every corner of the globe.

The LMC and its associated activities form part of a programme of events organised by the Mayor to grasp the huge economic opportunities for London coming from the Games. This includes hosting thousands of business leaders keen to base themselves in London and the use of City Hall as a business networking centre.

The LMC will support media and broadcast crews over the course of both the Olympic and Paralympic Games. Reporters will have access to state-of-the-art facilities including 24-hour access, desk space, press conference facilities and free connectivity allowing media to deliver material through the high-speed IT provision within the venue.

Media will also be helped to navigate the best of the city and the nation through a 50-day programme of visits, press conferences, launches and briefings. To date, 832 media organisations from 66 countries have registered with the LMC. The largest contingent is from China, with 600 journalists registered reporting stories to a global audience of 4 billion viewers. Large networks such as CNN, Fox News, ZDF (Germany) Nine Network (Australia) and CNBC are also represented.

Registration with the LMC also aims to support broadcasters operating in the capital with their photo pass also acting as a pan London filming permit which allows the world’s media to film across the city including some private land, something which has never happened in the city before

As well as offering a working hub, the LMC also provides information for media not able to come in person to the city. A special media website (www.londonmediacentre.co.uk) will offer exclusive daily stories, content, video and images. Around 8,000 stories, images and video clips have already been downloaded from this site by reporters in 73 countries.

The Mayor of London, Boris Johnson, said: “This will be a summer like no other, presenting an unparalleled opportunity for London to show off its wares to a global audience of billions. An inquisitive army of reporters, camera crews and photographers are migrating to our city to see not only sporting history in the making, but everything that makes a host city tick.

“From the iconic to the little known, we want these media professionals to be offered an unparalleled experience of the capital and a smorgasbord of great stories. This will ensure that future tourists and businesses get a taste of why London is the best place in the world to visit and invest in for years to come.”

Gordon Innes, CEO of promotional organisation London & Partners, who is responsible for the creation of the 50-day programme of events added: “As a centre of creativity and talent, and a leading destination to visit, study and do business in, the role of the LMC is crucial in carrying London’s key messages to the world.

“Our overriding objective is to show the world’s media just what London has to offer, both in 2012 and beyond and ultimately we want to make their experience in the capital as seamless as possible. With the outstanding LMC facilities, the pan-London film permit and the exclusive access to over 600 unique events – this is truly a media centre to be proud of.”

Media registered for the LMC will be offered a huge range of content, whether print or broadcast media, and according to their special interests. This includes exclusive behind-the-scenes events and activities both in London’s museums, palaces and parks and across the UK. Events will include great British brands and institutions such as Harrods, the Tower of London and the Royal Mail, who are planning a number of exclusive events to showcase the very best British products and artists, and to celebrate the London 2012 Olympic and Paralympic Games.

Media tours through England, Scotland and Wales will showcase all aspects of the country including the birthplace of the modern Olympics – Much Wenlock, the world famous Edinburgh Festival and Fringe and the new Wales Coastal Path where you can walk the entire length of a country’s edge.

The media centre will also offer information from and host press conferences by UK government Ministers and officials, the Mayor of London and other key figures in the UK’s hosting of the 2012 Games.

Registration with the LMC will also allow journalists access to similar special media services in other areas of the UK that are hosting Olympic & Paralympic events – for example Weymouth and Portland, the venue for the 2012 sailing competition.