Are you ready for World Cup overload? The tournament remains the last great football hurrah for terrestrial television and they are determined to make the most of it, writes PHILIP BARKER.

England open against Tunisia next Monday. The last time the same opponents met was 20 years ago, prompting the opening line “shouldn’t you be at work?” from Des Lynam on World Cup Grandstand.

World Cup fever took a while to take hold. The home nations weren’t even members of FIFA when the whole thing started in Montevideo in 1930 and it was just as well  there were no tv pictures of England’s bow in 1950, beaten by the United States.

The arrival of Eurovision made coverage of the 1954 World Cup possible, but even in 1958, when all four home nations qualified for the final stages, coverage was hardly wall to wall, though it introduced teenage prodigy Edson Arantes do Nascimento (aka Pele).

In  1962 David Coleman described the Italy v Chile match from Santiago as “the most stupid, appalling and disgusting exhibition of football possibly in the history of the game”. The Italians had two men sent off, Chile reached the semi finals. England, incidentally, lost in the quarter finals.

A  consortium of BBC and ITV provided pictures for the rest of the world in 1966. Commentators were able to sample the “generous facilities with night service” at the BBC canteen in Shepherd’s Bush. TV coverage of the final was superb, but still lost out in international awards to a church service from the Vatican.

The 1970 World Cup final saw Brazil “take it in turns to give an exhibition” in the words of commentator Kenneth Wolstenholme.

Much later he revealed there had been a plot by BBC executives to replace him as match commentator with David Coleman. Only the latter received billing in the Radio Times.

The tournament itself was the first transmitted in colour, some matches kicked off at high noon local time. Brian Glanville famously wrote “the tournament had been prostituted to European television”.

It also was the year the panel took flight. ITV’s, chaired by Brian Moore, was the brainchild of the revered former SJA  (Sports Writers’ Association)  president John Bromley, who was the producer of ITV’s London studio.

When Mullery returned home, he appeared on screen to confront Allison. It was slightly awkward viewing but for better or worse the panel was here to stay. In one edition, viewers even sent in questions asking about the panellists’ families.

ITV’s new recruit in 1974 was one Brian Howard Clough. His most famous pronouncement came before a qualifying match when he branded Poland keeper Jan Tomaszewski a clown. You know the rest. He played the the game of his life as England were eliminated. Ole Big ‘Ead was always compelling watching. 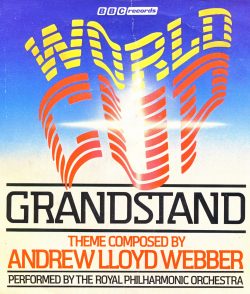 Over on the Beeb, Lou Macari once branded tactics “all c***p”, though in back in 1982, Generation Snowflake was unheard of, so there was no apology for language which might cause offence.

This incidentally was the year Andrew Lloyd Webber had a starring role in World Cup coverage. His music “Jellicle Ball” from Cats was chosen as the BBC theme. It was the second time in a row he’d composed the tv music.

In 1978  he was preparing for the opening night of Evita when he wrote “Argentine Melody”. He can even be seen performing it with his group San Jose on re-runs of Top of the Pops. In those days, the World Cup themes were released on souvenir single and keenly awaited.

Jeff Wayne, appropriately composer of “War of the Worlds” did ITV’s theme for 1982 and then Puccini’s aria Nessun Dorma was the Beeb’s choice for Italia 90, and the wonderful Vusi Mahlahesa’s “When you come back” proved an inspired choice for ITV in 2010.

Forty years ago, Argentina’s military junta spent millions on a new international broadcast centre to transmit colour pictures to the world. The locals still watched in black and white.

None of this helped Archie McPherson, as the office back home had forgotten to book a circuit for his BBC Scotland commentary on the match with Peru from Cordoba. 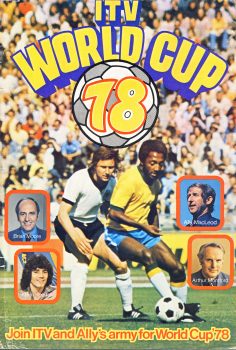 That television pictures proved possible at all in 1986 was a wonder. Mexico had been hit by an earthquake in late 1985 which destroyed much of the Broadcast Centre with great loss of life. The competition opened on time but when ITV’s Peter Brackley spoke into a microphone at Spain v Brazil, viewers heard only silence back in Britain.

There were technical problems galore in the first few days as the technology simply could not cope. Order was restored in time for the “hand of God” of Maradona.

At later World Cups the presentation became more ambitious and even panels was transported to some fabulous locations, which is how we were treated to the sight of Adrian Chiles and company in shorts on the Copacabana last time around.

In the early days the commentaries were done through the telephone lines using crocodile clips. They sounded like they came from the far side of the moon, but they were exotic and exciting.

Today sound technicians impeccably record every last crunching tackle and the television images are magnificent from every angle. Now all we need is for the football to live up to it.