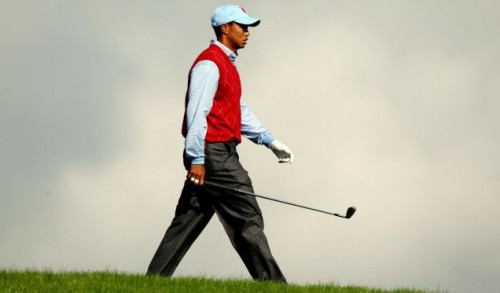 JANINE SELF tracks down Dick Turner, The People sportswriter at the Ryder Cup who dared to ask Tiger Woods if he is an ordinary golfer

So Tiger, are you just an “ordinary” golfer?

Back at Nike HQ on Tuesday, the corporate big-wigs tuning in to see their boy bland his way through yet another press conference must have been shuddering in unison.

This is not how it works. Not in corporate America anyway.

But Celtic Manor in south Wales isn’t the good ole US of A, which is why veteran British golf writer Dick Turner of The People was able to grab the mike and ask his question of  Eldrick Woods.

Here, in its entirety, is that question:

“You don’t win Majors any more, you don’t win tournaments any more and you are about to be deposed by Europeans or Phil Mickelson as the world No1. So where is the Ryder Cup on your agenda now that you’re an ordinary golfer?”

Sharp intake of breath all round. The Tiger mauled? Surely not.

Woods lasered Turner with a trademark look and then decided not to answer what was a golfing enquiry, even if a slightly spikey one (not that he answers many questions these days when “fulfilling” his media “obligations”).

“I remember, you’re the same one at the British Open who asked me that, too. I hope you’re having a good week,” Tiger said at Turner.

And, with that, the room was allowed a collective chuckle to relieve the tension while the redoubtable Turner was either slapped on the back or frowned upon, depending whether your allegiance was Euroland or Stars and Stripes.

By this morning, Essex-based Turner woke up to find he was making the Ryder Cup news rather than reporting on it.

BBC Radio 2 broadcast his question at breakfast time while Turner was interviewed on 5 Live to talk about his interrogation technique.

Turnergate hit Twitter.  DJ Spoony thought it was a disgrace, an opinion that had some support judging by the retweets, although not from journalists.

Anyone would have thought that Dick Dastardly had asked Tiger whether he planned to pop into a Splott phone box, take a number for Luscious Lindy and invite her and a few pals round to while away those boring hours in the team hotel.

Then Turner could have repeated the question he once put to former Tottenham sporting director Damian Comolli, widely regarded as the power behind Martin Jol’s controversial departure.

It was at the unveiling of replacement Juande Ramos when Turner piped up:  “Damian, you have the morals of an alley cat, don’t you?”

Tiger got off quite lightly.