VIEW FROM THE PRESSBOX: Is there something about the modern game which gets your hackles up? ERIC BROWN’s encountered a couple of club press officers he’d like to mention…

Maybe there is something you hate about football.

Richard Foster writes of his own personal football no-nos in What I Hate About Football.The sub-title gives you a clue as to where the author is coming from, following Blatter and the affair FIFA: “The Definitive Guide to Everything that is Rotten in the Beautiful Game”. 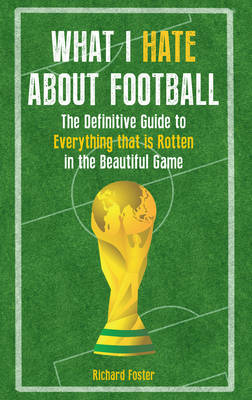 Part of the appeal of this book is to read it and then say to yourself: “Ha! I’ve got a big Football Hate that he’s left out.”

The book is pretty comprehensive, though, taking in such varied subjects as Diving, Gambling, Gloves, Haircuts, Qatar, Yellow Boots and a whole host of other football irritants you didn’t realise you hated until you read the book.

My own Football Hates would have begun with escalating admission prices. But the football authorities seem to have made a belated move to restrict these, perhaps prompted by horrified Liverpool fans who protested against hefty price hikes and forced a greedy club into a U-turn.

Let me offer a couple of other personal choices.

Kick-off times are driven by television. Since TV pours enormous sums into the game it naturally wants to show big games when a large audience is guaranteed.
That can mean, for example, Manchester or Merseyside fans being required to travel to London for a 5.30pm cup tie.

They have no chance of travelling back on public transport the same night.

That’s plain wrong. Any new television agreement should outlaw kick-off times where away fans cannot use public transport to return afterwards. If it means less cash in the pot from TV so be it. Don’t hold your breath on this one.

Another personal Football Hate can be witnessed on almost every ground each weekend. You have eagerly anticipated your team’s latest home game for a week, maybe two, the pre-match announcer has whipped up excitement to fever pitch, the teams appear, the ball placed on the centre spot… and then what happens ?

The huddle. A real anti-climax as 11, or sometimes even all 22 grown men put their arms round each other and stick their bums in the air when they could be getting down to earning their barrowloads of cash.

This distasteful gathering looks more at home on a rugby pitch. What can they possibly be talking about? After all, they have been together in a dressing room, on a bus or on a plane for perhaps hours with ample time to discuss tactics or which opponent to kick. And they had a week before that to swap views in training.

Although this giant waste of time seems to have become accepted it may not be too late to eliminate it from the game. It only needs one brave ref to book the lot for ungentlemanly conduct and it won’t happen again.

I picture an even better scenario where one team is still in a huddle while the other is allowed to kick off and walks in a goal immediately. Oh joy.

Mind you, after this week, the loathing for that trait of the modern footballer was comfortably surpassed by shirt-swapping at half-time. Was there any single display of affectation by a professional footballer on £100,000 a week more likely to demonstrate their utter disdain for the fans who help to pay their wages?

As journalists, we all have different priorities. One of my personal dislikes about the way the job has gone concerns increasing club control of interviews.

You go to interview a player only to find the club press officer, or media director, or communications manager sitting in. It’s not long before the player begins to answer a question and the aforementioned POMDCM leans forward to interrupt: “They don’t want to talk about that.”

But the player’s already talking about it quite happily. The player, taken aback, shrugs and apologetically points out he’d better keep quiet on that subject.

It’s happened to me. Almost certainly to you too. Is this is the POMDCM’s personal ban or actually the club’s? I suppose we will never know.

At the end of an interview, where the player is regularly stopped from saying anything remotely interesting, comes the final blow. The demand from the POMDCM that your copy should be submitted to the club (in other words him or her) for approval.

I really hate that.

As with all authored pieces on sportsjournalists.co.uk, the views expressed here do not represent the views or policy of the SJA. Readers are always welcome to post their comments on the content of this column and the rest of the site