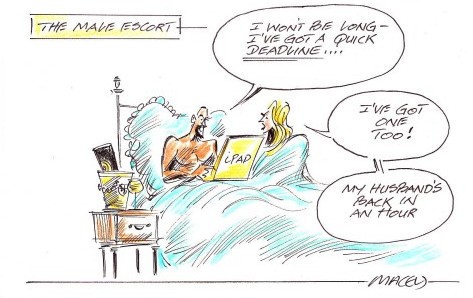 VIEW FROM THE PRESSBOX: In an era of zero hours contracts and under-employment, RANDALL NORTHAM recalls sports journalists who have “multi-skilled” in the past, as estate agents, farmers, and even as a male escort.

The other day, my mind wandered towards what I might do if I was not involved with words. Since I was 16, apart from a couple of years when I tried to impress a girl by becoming an insurance clerk, I have been a journalist or publisher.

I couldn’t think of anything else I might do.

I’d like to be a wine taster or to run a restaurant, but the truth is I wouldn’t spit that much in the former and I’d eat too much in the latter. My musing was supposed to send me to sleep but it just kept me awake, as I remembered other journalists who have tried other things, and some of whom had managed to hold down other jobs in between filing their 500 words, plus nannies, on the whistle.

A lot of sports reporters ghost-write books. Some, like me, turn to publishing them. The most successful I know to do this is Anton Rippon, whose words also appear on this site. He’d clearly been looking for extra stimulus because he left the Derby Evening Telegraph to run a council-owned sports centre in the late 1970s, turning freelance a couple of years later before forming Breedon Books in 1982. It was a publishing template for the rest of us who followed, but I doubt many of us have been as successful.

It makes sense, though, for journalists to become authors or publishers; the words are the same, the editing is the same and the deadlines, while not as tight, loom equally large.

It’s the sports journalists who branch out away from words who fascinate me.

Newcomers to the Daily Telegraph may have wondered why Peter Fieldsend was known as “Farmer”. By the time he took redundancy in 2012, Fieldsend was assistant sports editor after more than 22 years on the desk. And through much of this time, he was running a Sussex smallholding. And no, that’s not meant as a euphemism. Now his Linkedin account says “newspaper production, now lamb production and agricultural and countryside interests and work”.

John Wragg, former athletics correspondent and Midland football writer of the Daily Express, is another farmer, although his harvesting of words lately has seen some bumper crops as a freelance. I always imagine the desk ringing up and being told, Archers-like, that he’s down in the lower field tossing hay.

The late Peter Hildreth, the former Olympic hurdler and long-time athletics writer for the Sunday Telegraph, spent most Mondays to Fridays working as an estate agent in upmarket Kensington, while Sandra Stevenson, whose name appeared above reports in The Guardian on the New York marathon in the 1980s, was a stewardess for an airline. She once served me a drink at 30,000 feet. It was odd.

She also wrote about winter sports, particularly ice skating, and I imagine one of the attractions for the Guardian was that they saved on their travel bills.

But there is one extra-curricular activity in which one of our ilk indulged which tops all these. I have it on impeccable authority that one sportswriter moonlights – or moonlighted, he’s getting on a bit now – as a male escort. I do not believe that can be topped.

If you know of anybody who combines our trade with something a little out of the ordinary, then please do post a comment and let me know.