ANTON RIPPON on one of the first football broadcasters, a sports journalist who happened to be a former footballer

In all walks of life, a bit of forward planning rarely goes amiss. Looking ahead to see how circumstances might change can often be the difference between success and failure. Football is no exception. Preparation can mean everything. 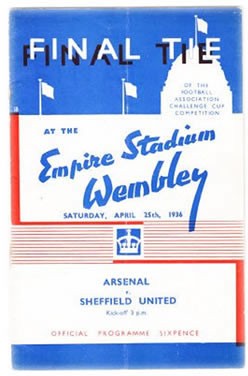 A little imagination is also to be valued. And had it been left to one visionary sports journalist who managed to combine that job with actually playing league football – presumably he never had to write about matches in which he appeared – then today’s game could have looked very different. For a start there would be no transfer fees, and Celtic v Manchester United would be a routine league fixture.

Back in the summer 70 years ago, in 1943, the Second World War was a long way from over. The German army in North Africa had surrendered, the Americans had driven the Japanese from Guadalcanal, and the Allies were preparing for the invasion of Sicily. Small wonder that the Football League felt confident enough to spend £36 on the purchase of a special trophy, ready for the victory that was surely now in sight and the transitional season that would then have to be played while football sorted itself out.

In July 1943, too, the FA made some radical suggestions for the future, including an increase in international football for schools, clubs and leagues to take advantage of the increase in air travel in the post-war world.

A full-time England team manager was mentioned. Hitherto, the FA had steadfastly refused to countenance such a post, although even now their idea of an England manager was one who would “assist” in the selection of teams rather than have sole charge. Still, it was a step in the right direction.

Transfer fees were also addressed; the FA was concerned that over-inflated fees might cripple the game’s finances and that a cap might work.

But former England amateur international and 1912 Olympic football gold medallist, Ivan Sharpe, then editor of the Athletic News Football Annual, wanted to go one step further: “I pray the day of the inflated fee is over. Club poverty – strange to relate – won’t end it. The only remedy is an undefeatable ban.”

An outside-left, Sharpe had entered league football with Second Division Glossop in 1908, when he took up a position on the Glossop Chronicle. Transferred to Derby County, he played in the Rams’ Second Division title-winning team of 1911-1912 before the offer of a job on the Yorkshire Post took him to Leeds where was one of the few footballers to play for both Leeds City and its eventual successor, Leeds United.

In 1924 Sharpe succeeded Jimmy Catton as editor of Athletic News and discovered in a drawer in his predecessor’s desk the letter of application he had written to the newspaper in 1909.

In 1936, Sharpe was selected by the BBC to be one of two journalists (the other being F.N.S. (Norman) Creek, another former England amateur international and Daily Telegraph cricket writer) to provide the first nationwide live radio commentary of the FA Cup final.

Until his death, Sharpe contributed a weekly article in the Wolves match day programme, and in 1954 he also produced a volume of memoirs, Forty Years in Football.

Back in 1943, Sharpe, who would also serve as president of the Football Writers’ Association, wanted a post-war British League: “Such a league is bound to come sooner or later.”

That wartime summer, doubts were also expressed about the reintroduction of the pre-war bonus scheme for players, and Sharpe supported those doubts: “This is a welcome development, since the £-a-point system takes the fee all too near the field of play and makes for temper.”

It is tempting to say: “If only they had listened to Ivan Sharpe … ” But, of course, even Sharpe, visionary that he apparently was, couldn’t have foreseen the millions of pounds of television money that nowadays goes into the pockets of players and their agents.

When he died in February 1968, football still bore some resemblance to the game upon which he commented professionally. The maximum wage for footballers had been abandoned in 1961 but, two years after England won the World Cup, most top players still had to find jobs when their playing days were over. There were no millionaires. And definitely no “wags”.

But, whatever course the game had taken, one has the feeling that clubs would still found a way to end up in debt.

Common sense has never been a commodity spread thick in football. In any era. Ask the supporters of the many clubs who, thanks to remarkable mismanagement, have almost gone to the wall.

Footnote: After a dispute over fees, the media were banned from filming that 1936 FA Cup final. The FA wanted £1,500 but the broadcast companies would pay only £900. When the FA finally accepted the original offer, the broadcasters withdrew it and said they were now prepared to pay only £500. The FA refused and the only film ever taken of the match was from autogyros flying above the stadium.Autogyros? Take a look at the clip and all will be made clear…