ANTON RIPPON doesn’t like to brag about it, but did he ever tell you about the time a royal corgi sniffed his trouser leg…

The arrangement was to meet in the National Theatre restaurant. As usual, David Lemmon was there first, greeting me with a beaming smile and already halfway through a bottle of house claret and with only crumbs remaining in the bread basket.

I liked David. He knew how to enjoy life. He also knew how to turn out a book. Scores of them in fact. A few were on the theatre but most were on English county cricket. For some years he edited the Benson and Hedges Cricket Year.

One day his Wisden obituary would, rather unkindly in my view, describe the quantity of his output as overwhelming the quality. His work was always well-researched and readable, and, anyway, David was always an agreeable lunch companion. And this was in the days when publishing could be about a good lunch as well as a good prospect.

Sometimes we met at his favourite Italian restaurant close to Highbury – he had a permanent reservation there before Arsenal home matches – but on this day it was the National Theatre, where he was handing over the manuscript of his latest book that we were publishing at Breedon Books, when that company blossomed with a good name for its sports titles.

The restaurant was practically deserted: just David and me, and, on the next table, a chap who looked vaguely familiar.

He was dressed all in black, including a blazer and polo-neck shirt, and had a half-bottle of champagne to accompany his lunch. He looked across, seemed to recognise David and wondered, unless we were discussing business, whether he could join us. He was, he said, a great fan of David’s work and wanted to talk about cricket.

We’d been under way for about five minutes, chatting away, when David suddenly said: “I’m awfully sorry, Anton. Do you know Harold Pinter?”

I suppose I’d have been more impressed if he’d said: “I’m awfully sorry, Harold. Do you know Anton Rippon?” But, of course, that’s not how these things work.

The Nobel Prize-winning playwright seemed a pleasant enough individual, although we stuck exclusively to cricket because, I remember thinking at the time that, when it came to politics, he could get a bit confrontational.

I also remembered that when an aspiring young actor called Alan Ayckborn had asked Pinter for some biographical detail of the mysterious character, Stanley, so that he might play the part better in an early production of The Birthday Party at Scarborough, Pinter had said to him: “ I think the answer to that is mind your own fucking business and just read the lines.” So I didn’t attempt to introduce the theatre into the conversation.

But the cricket was interesting enough and I bet that Pinter probably arranged his visits to Scarborough to coincide with the Festival at North Marine Road. Whatever, he and David began to play a game: one would name a Test team and the other would try to guess the year and the opposition. They were both very good.

Pinter said that his love of the game had begun when he was a boy in the East End during the Blitz. Evacuated to Yorkshire, he saw Len Hutton, on leave from the Army, playing at Headingley.

“I was too shy to approach him, though,” Pinter said. “That’s always been a regret.” 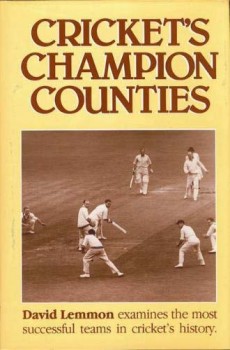 He seemed obsessed by cricket and, resuming playing in his 60s after some coaching from a Cockney of Italian decent, he captained the club of theatrical wanderers, the Gaieties, and was later its chairman.

In October 2008, Pinter gave his final interview to The Guardian, when he said, “I tend to think that cricket is the greatest thing that God created on Earth, certainly greater than sex, although sex isn’t too bad either.” Pinter told his interviewer, sportswriter Andy Bull, that he was looking forward to watching the Ashes series in England that coming summer. Alas, he was to die on Christmas Eve.

My good friend David Lemmon had died 10 years earlier. He had enjoyed a wonderful day at The Oval, watching a Test match with his friends, and then he had a stroke and went. Just like that.

“It was the way he would have wanted to go,” his wife said when she rang to tell me the news.

So I am the only survivor of that lunch. And I still use the story to drop the name of Harold Pinter into the conversation now and again. Like I do with the fact that I was on Max Bygraves’s Christmas card list, and Simon Dee once threatened to sue me. And when I was standing next to Baroness Heyhoe-Flint – she was just Rachael in those days – and the Queen Mother mixed up the former England women’s cricket captain turned sportswriter with an actress, then  looked at me and raised her eyes, sort of “Oh dear me!” and I smiled. But then a flunky hurried her along. A royal corgi did pause to sniff my trousers. But then even he turned his nose up.

My pal and occasional co-author Andy Ward, son of the late Derby County and England player and Rams manager, Tim Ward, has a story that he reckons is hard to beat. It is about the day he escorted a young lady back to her home in Cambridge one tea-time and she found a note on the kitchen table from her mother. It read: “Gone down the pub to celebrate Max’s Nobel Prize.”

But I still think my lunch with Harold Pinter tops it.