The Sports Journalists’ Association has sent a goodwill message to our President, Sir Michael Parkinson, after the news at the weekend that he is receiving treatment for prostate cancer. 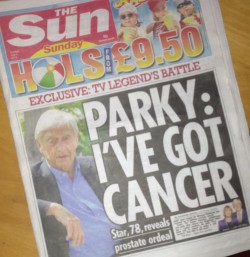 Sir Michael, 78, began radiotherapy last week. “I’ve been told to expect a full recovery,” he said in an interview with The Sun, “and that’s the goal.”

David Walker, the SJA chairman, has been in contact with Sir Michael.

“I’d like to extend the thoughts and good wishes of all our members as you receive treatment,” Walker said.

“I’m sure your candour in publicly talking about your illness will help many men face up to their own medical issues. As a man in my 50s I’m aware of the numbers of friends and colleagues who are receiving similar diagnoses to you.  Many have reluctantly admitted that they’ve put off seeking help despite spotting problems.

“That’s where your standing as one of the nation’s great communicators can only help other men face up to their concerns.

“Given your days at Granada TV back in the Sixties you realise you’re now a member of a distinguished group of Manchester sportsmen who have all successfully faced the challenge of prostate cancer. Denis Law, Mike Summerbee and Brian Kidd have all gone through the dark, desperate days and emerged to live full, happy lives,” Walker said.