The cricket World Cup that begins in India this week will have to go some way to match the magic of the first tournament 36 years ago, writes PHILIP BARKER

It snowed in England five days before the Cricket World Cup began in June 1975. As omens go it was not perhaps the best. 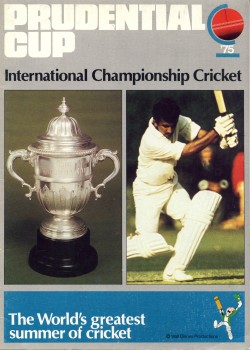 But unlike the juggernaut of a tournament about to begin in India, Bangladesh and Sri Lanka, the first tournament for what was called the Prudential Cup was an exercise in leaving the public wanting more. That first event lasted only five playing days spread over a fortnight of what turned out to be a flaming June.

The format then was mercifully simple: two groups of four, the top two in each going through to semi-finals. The six Test-playing nations were joined by Sri Lanka, then lobbying hard for Test status and “East Africa”, a combined team featuring Kenyans, Tanzanians, Zambians and Ugandans. The squad included a 43-year-old Don Pringle, father of Derek, the future Essex and England all-rounder, now Telegraph cricket correspondent.

Their presence was important for a World Cup, as Africa’s only representatives.  Apartheid South  Africa was excluded and stars such as Barry Richards and Mike Procter, one-day cricket pioneers in the English county game, were destined never to play in the World Cup.

The women had got in first with a World Cup of their own in 1973, but this event really captured the imagination, pitching the might of England at home on early summer wickets, against the powerhouse of Lille and Thomson’s Australia, and the then emerging force of the West Indies.

The organisers used all the marketing big guns that the 1970s could offer. We had the Disney character Jiminy Cricket to promote “the World’s Greatest Summer of Cricket” and a photo op featured a blonde in T-shirt and hot pants with a cricket bat at the ready.

There was no overblown opening ceremony. Instead, the teams were invited to Buckingham Palace and posed happily on the lawns as the sun came out.

England, as hosts, were made 11/4 to win the tournament, and were certainly the most experienced nation in one-day cricket. They had played more one day internationals than any other country: over a four-year period, 13 games.

The then underdeveloped international one-day scene, though, was slowly following the English domestic scene which had seen the 60-over Gillette Cup launched in 1963, and by 1975 featured three differently formatted tournaments.

The smiling face of Peter West welcomed BBC television viewers on the opening day of the World Cup, when the four group matches all took place simultaneously. With no dedicated sports channels or red buttons then, no  floodlights and no thought of staggering the games for the benefit of television, coverage of England v India at Lord’s alternated with the sell-out Australia v Pakistan at Headlngley.

John Jameson had been included in the England squad in the absence of Geoffrey Boycott. Jameson it was who faced the first ball from Indian fast medium bowler Madan Lal. An attacking batsman with a reputation for getting on with it , Jameson opened the batting with his Warwickshire colleague Dennis Amiss. “It was just like an ordinary match, you didn’t feel you were in a World Cup at all,” he said.

By today’s standards, England’s progress in that innings seems pedestrian. The 100 did not come up until the 25th over. Amiss was still there on 98 and England were 150 for 1 when they broke for lunch. Amiss duly completed his century with Keith Fletcher and Chris Old offering support, and against an unsuited Indian attack, England totalled 334 for 4 off their 60 overs.

Over the course of the tournament, BBC coverage of the matches switched with Watch With Mother and the
Open University. All of which was more entertaining than India’s innings. They were never likely to chase down the 335 required to win but no one quite understood why Sunil Gavaskar batted out the entire 60 overs . He finished with 36 not out and India ended up on 132 for 3.

“It was embarrassing, we just wanted to get off the field” Jameson recalled.

GS Ramchand the Indian team manager issued a statement to the effect that Gavaskar considered the England score unobtainable and had therefore “taken practice”.

“Whatever the motives were, he had no right to force them on the sponsors or the spectators,” wrote Tony Lewis in The Cricketer.

Even so, England were on their way in what was acknowledged to be the easier of the two groups. In the other, Australia beat Pakistan at Headingley although Thomson’s first over “was not without the usual controversy which always seems to surround him” wrote the rather po-faced reviewer for The Cricketer’s official report on the tournament.

“He needed no less than 11 deliveries to complete the over and finished with a gesture to the crowd which did him no credit.”

It was the West Indies v Pakistan match at Edgbaston four days later which really set the tournament ablaze. West Indies were 203 for 9, needing 266 to win. Clive Lloyd locked in the toilet could scarcely watch as Andy Roberts and wicket keeper Deryck Murray saw the West Indies home.

That result rendered academic the sellout encounter between Australia and West Indies at the Oval. Presciently John Woodcock exalted spectators to come early in his preview for The Times. “Whoever bats first, it will be worth arriving early to see it,” he wrote.

Australia batted first and were soon in trouble at 61 for 5. It was the day of Trooping the Colour, and up in the BBC commentary box, Richie Benaud michievously observed that the RAF flypast was in honour of the first Australian boundary.

Australia’s meagre 192 was never enough to trouble the West Indies but Alvin Kallicharran’s un precedented assault on the bowling of Dennis Lillee, with five fours in one over, is worth viewing over and over.

The presence of so many great fast bowlers captivated Fleet Street. Lillee, Thomson, Roberts and Co “gave cricket a necessary strident note that prevents the game from being lulled to sleep”, wrote Brian James in the Daily Mail.

There was little chance of anybody sleeping at the England v Australia semi-final at Leeds. For some reason the authorities decided to use the same pitch that had been used for Australia’s first match in the tournament. England batted and were soon in trouble on a seaming track.

To the surprise of all, it was not Lillee or Thomson who did the damage but seamer Gary Gilmour, 12 overs six maidens 6 for 14,  as England were all out 93, The hero of the hour helped Australia recover to win from 39 for 6 .

The day of the final was June 21, the longest day of the year and a gloriously sunny day. It was just as well. The BBC went on air for the final at 10.50am. It was almost 12 hours later that Jim Laker, Richie Benaud and company finally walked away from the commentary box after what John Woodcock called “a piece of theatre, drama, tragedy, carnival and farce rolled into one.”

A Clive Lloyd hundred, five crazy run-outs and a twilight finish in St John’s Wood later, West Indies had won by 17 runs. Not a minute was lost to bad light or rain in the entire tournament, although it is extraordinary to consider  now that, back in the summer of 1975, there were no firm plans for a second tournament.

Such was the the success of the first World Cup that, 36 years later, we are on the eve of the 10th such tournament and yet there are many who still consider the 1975 World Cup, of Clive Lloyd and Dennis Lillee, of Don Pringle and John Jameson, remains the best there has ever been.