SJA member ANTON RIPPON on the thorny issue of  expecting journalists to work for free, especially in broadcast. 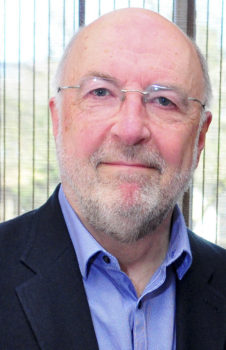 IT was the spring of 2015. A researcher from the BBC telephoned to ask if I would contribute to a radio programme looking at the 1936 Berlin Olympics. In 2006 I’d written a book, Hitler’s Olympics, to mark the 70th anniversary. Now the Beeb wanted to do something for the 80th.

I was interested, of course. What did I have to do? Well, they would send me a list of questions – more than 100 – and my answers would be used to link together the segments. I would, in effect, provide the narration.

There was a moment or two’s silence before I was told that, well, actually, there wouldn’t be any payment, but they would include me in the credits.

My mind went back a few years, to when a BBC local radio station wanted me to spend an afternoon trailing round with a reporter, explaining various sporting venues that had fallen into disuse. When I asked about the fee, the answer was: “Oh, we thought that you’d do it for the warm glow of hearing your voice on the radio.”

I told them what I later told that researcher, and I will leave you to guess the answer.

It wasn’t always like this, however. In 1980, BBC Radio Derby paid me quite handsomely to write a six-part series called Derby at War, co-produced by Simon Shaw, who went on to produce BBC TV’s Antiques Roadshow.

Then I had a stroke of luck. In 1983 I worked with another talented local producer, Ashley Franklin, to do a one-off programme, The Day That Derby Won The Cup, in which I interviewed the surviving members of the team that beat Charlton Athletic (apologies to SJA president, Patrick Collins; it still hurts Charlton fans, apparently) at Wembley in 1946. 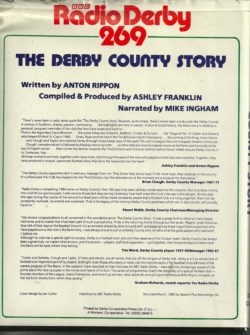 On the Monday after the programme went out, a new station manager, Bryan Harris, took over at Derby to be greeted by a pile of notes from the weekend receptionist, asking for the programme to be repeated. Bryan remembered how, as a 13-year-old schoolboy, he had listened to Raymond Glendenning’s radio commentary as Jack Stamps won the Cup for the Rams in extra time. He immediately commissioned 13 programmes to mark Derby County’s centenary the following year.

Of course, he had the budget to do it. Bryan, who died in 2015, saw to it that I was able to travel the length and breadth of England, interviewing former players while armed with a “UHER”, that heavy, clunky, just-about-portable tape recorder that was then the workhorse for radio reporters.

I regarded that particular job as a privilege. How many working days involve being paid to meet your boyhood heroes?

It was also a privilege to work with Ashley Franklin again. He was a consummate broadcaster. When the BBC let him go, it was a great loss to local radio in Derby.

Working on that Rams series gave me some amusing memories, not least of the day I struggled to keep two warring dogs apart while trying to record an interview with 1930s Welsh international, Dai Astley, at his Margate home. I managed it – just – with microphone in one hand, the other soothing a German Shepherd that was itching to pounce on the little terrier that shared its home.

There was a similar problem at the Derby home of former goalkeeper Ken Oxford. The Oxfords, a lovely couple, had a pet budgie that squawked throughout the interview. They wouldn’t move it at any price. Even my jacket thrown over the cage failed to quieten it. So when I got back to the office, I threw the tape to Ashley and said: “Best of luck.” Fortunately, his skilful editing resulted in a budgie-free interview.

Cup winner Raich Carter already had the kettle on when I reached his Hull home; and at Poulton-le-Fylde, Carter’s inside-forward partner, Peter Doherty ushered me straight into their dining room where a table groaned with food. “Mrs Doherty thought you might be hungry after your journey,” said Peter the Great, “so she’s made you this.”

The problem was that, having arrived in the area early, I’d just treated myself to a large lunch at a Blackpool hotel. I struggled manfully through another three-course meal, recorded the interview. Then didn’t eat again for about two days.

I struggled manfully through another three-course meal, recorded the interview. Then didn’t eat again for about two days

Former manager Tommy Docherty surprised me by saying that he didn’t want paying for the interview, while another 1946 Cup winner, Dally Duncan, harrassed me for weeks because “I’m just a poor pensioner”. Eventually I managed to get him £20.

Mike Ingham, the Rams fan who became the BBC’s chief football correspondent, came from London to record all the narration. The Beeb even paid actors from Derby Playhouse to record the dramatic parts that I’d written to cover the club’s earliest days.

When the project was launched at the Baseball Ground, the BBC director-general, Alasdair Milne, insisted on attending: he wanted to meet Raich Carter.

The series went out to great acclaim, quadrupling the station’s listenership in the slot in which it was broadcast. An edited version was made available on a double cassette. It soon sold out. I suppose that it’s too late to ask about royalties.

Those were great days working as a freelance in local radio, albeit writing and interviewing but rarely speaking. You see, I have never had what I regard as a voice. So that offer of a warm glow never appealed.