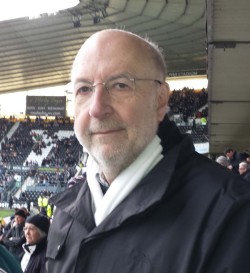 SJA member ANTON RIPPON on why England’s women footballers deserve the same recognition as the men, Nettie Honeyball, and where it all started.

SO, we’ve had the FIFA World Cup, in Russia, and the next will be held in Qatar in four years – and in the winter too.

Before then, though – next year, in fact – there is another World Cup, the FIFA Women’s World Cup to be staged in France. What could be more appropriate? The French have just won one World Cup, and now they are to host another. Yet apart from one social media campaign, so far as I can see there has been little attention given to what promises to be a fascinating competition.

There was a time when women’s football was not taken seriously. Those days have long since passed, and as the US women’s coach, Jill Ellis, said in Moscow last week: “I don’t know what the ramifications were in other countries, but you look at our own team, in our own country and the viewership and the attendance – there’s no difference [with the men]. So I think that FIFA 100 per cent should look at our game as a game, not as a women’s game or a men’s game.” And so say all of us.

Now I would like to tell the story of the woman who started it all. In 1894, one Nettie Honeyball placed an advertisement in the Daily Graphic seeking those interested in forming a football club for women. She received 30 replies from those who wanted to play, together with another 20 from those who supported the idea. The British Ladies’ Football Club was born, with a Tottenham Hotspur centre-half, Bill Julian, as its coach, and the feminist campaigner Lady Florence Dixie, youngest daughter of the Marquess of Queensberry, as its president.

Honeyball was herself a feminist. In 1895 she told the Daily Sketch: “I founded the association … with the fixed resolve of proving to the world that women are not the ‘ornamental and useless’ creatures men have pictured. I must confess, my convictions on all matters where the sexes are so widely divided are all on the side of emancipation, and I look forward to the time when ladies may sit in Parliament and have a voice in the direction of affairs, especially those which concern them most.” 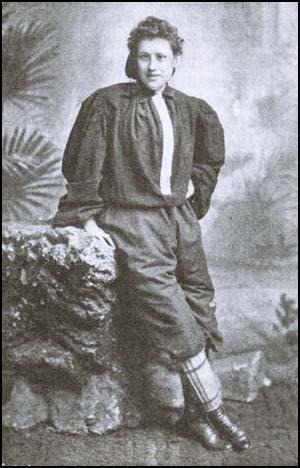 With no other women’s football club to play against, the British Ladies decided to split themselves into teams representing north and south London. The first match took place at the Nightingale Lane Ground, Crouch End, on March 23, 1895. There were 10,000 present although it should be said that a match between Crouch End and the 3rd Grenadier Guards preceded it.

What did the lady footballers wear? Well, the Victorians were not ready for women in shirts and shorts, and certainly not hotpants as that champion of women’s football, Sepp Blatter, would have quite liked. Voluminous blouses with knickerbockers or a divided skirt were the order of the day.

The north team won 7-1 and the reaction was mixed. The Daily Sketch told readers: “The first few minutes were sufficient to show that football by women, if the British Ladies be taken as a criterion, is totally out of the question.”

The Manchester Guardian reported: “Their costumes came in for a good deal of attention…. one or two added short skirts over their knickerbockers…. When the novelty has worn off, I do not think women’s football will attract the crowds.”

What did the lady footballers wear?  The Victorians were not ready for women in shirts and shorts.  Voluminous blouses with knickerbockers or a divided skirt were the order of the day

The Sportsman, however, commented: “True, young men would run harder and kick more strongly, but, beyond this, I cannot believe that they would show any greater knowledge of the game or skill in its execution. I don’t think the lady footballer is to be snuffed out by a number of leading articles written by old men out of sympathy both with football as a game and the aspirations of the young new women.”

But the British Medical Journal was dead against it: “We can in no way sanction the reckless exposure to violence, of organs which the common experience of women had led them in every way to protect.’” It was ironic, then, that in April 1895, in Brighton, the women played a match that attracted 5,000 spectators and raised money for local medical charities.

Other matches followed as the Ladies toured the length and breadth of the British Isles. Another crowd of 5,000 turned out to see the women play in Bury, where £100 was raised for local charities. More than 8,000 saw them play at Newcastle United’s famous St James’s Park.

Between March 1895 and September 1896, British Ladies played 62 matches but towards the end only 400 spectators were bothering to turn up. Nettie Honeyball appears to have left the club in the spring of 1895, perhaps disillusioned by the fact that what had started out as an assault on the male establishment had degenerated into a moneymaking venture hijacked by promoters. Nothing more was heard of her and she remains an intriguing figure. Indeed, the name may even have been a pseudonym. 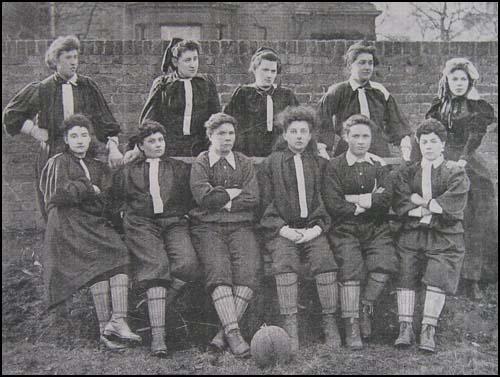 In the meantime, women’s football foundered. In August 1902, the Football Association banned women playing against men. It was not until the wholly different circumstances of the First World War, when women were drafted into factories, that some formed works football teams.

Once such club, Dick, Kerr Ladies FC (Dick, Kerr & Co Ltd manufactured light railway equipment), was formed in 1917 to raise money for a military hospital. After the war Dick, Kerr Ladies travelled the country, playing to large crowds including one of 53,000 at Everton’s Goodison Park, and even toured the USA. But in December 1921 the FA banned women’s football being played at any of the grounds of its member clubs. The ban was not lifted until 1971. The first official England team was formed a year later, and in 1993 the FA took over the running of women’s football in England.

The first unofficial Women’s World Cup took place in 1971, the Coppa del Mondo in Italy. The first organised by FIFA was in 1991, in China, won by the USA who are also the current world champions.

England were bronze medal winners in 2015. Wouldn’t it be marvellous if football really did come home next year? And it all began with the mysterious Nettie Honeyball.

The SJA is the largest member organisation of sports media professionals in the world. Join us: Click here for more details