VIEW FROM THE PRESSBOX: And another football club decides it will ban reporters from its games and press conferences. ANTON RIPPON suggests that this latest instance is a sign of the times

When yet another football club announces that it will no longer deal with its local newspaper, you tend to have that déjà-vu-all-over-again feeling, as American baseball character Yogi Berra is reputed to have said.

Over the past few years, sportsjournalists.co.uk has reported on many instances, involving clubs from the Premier to the Ryman Isthmian League, where a local journalist, and sometimes a whole newspaper group, has found the door to the press room slammed in their face.

But I have some sympathy with the latest club to put up the “Not Welcome” sign after Boreham Wood FC of the National League – the fifth tier in English football – was told by the Newsquest-owned Borehamwood & Elstree Times that the paper no longer had the resources to cover the club owing to its own “chronic” financial state.

The result was a strongly worded statement on the football club’s website, headed: “Club calls time on local paper”, branding the publication “redundant” and “yesterday’s news”.

Newsquest North London’s group editor, Tim Jones, was quick to respond, describing the club’s claims as “inaccurate” and pointing out that the title continues to provide the same “dedicated coverage” as previously.

Boreham Wood, however, remain unconvinced, believing that the Times appears to “far more interested” in other less local teams including Premier League side Watford, Football League team Barnet – and even St Albans City, who play in the division below Boreham Wood. 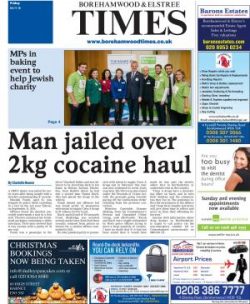 The newspaper’s plight comes at a time when free newspapers also owned by Newsquest elsewhere in Greater London have been laying off reporting staff – not just in sport – and even publishing editorials asking for readers to submit news reports.

In Boreham Wood, the football club’s statement reads: “We feel, as the highest placed non-League club throughout Hertfordshire that the paper could do more but we have to now move on and for us they are now yesterday’s news.

“For many years, we have tried to help them by providing our own reporters and quite often even a photographer. We have had to almost beg them though to agree contra deals, so we could pay these people a couple of quid in expenses.

‘We have had to almost beg them to agree contra deals, so we could pay these people a couple of quid in expenses’

“It’s fair to say though, it’s not our job to do their sports reporting and we are happy for them to continue to take our reports, regurgitate them as their own, while never attending a game, as that’s how they now choose to work.

“With the rise of Facebook, Twitter, plus other social media mediums, there is now a clamour for instant news, and the reality is that the internet gives us that. As such it now perhaps leaves the once much loved weekly local newspaper redundant?

“We fondly recall the time that the Borehamwood Post and then Times, served its local community and its sporting clubs very well. Unfortunately that time has now long since passed.”

The club said that it will now attempt to provide information through its own improved website and that it plans to create a channel offering videos of match highlights and interviews.

Tim Jones responded: “The Borehamwood Times has long been a loyal supporter of Boreham Wood Football Club. Contrary to the inaccurate statement made by the club, we continue to provide the same dedicated coverage that we have in recent years, both in print and online.”

When it comes to dealing with the regional press, Boreham Wood FC does have previous. Last year a reporter from the Portsmouth-based daily The News had to pay for entry to their Meadow Park ground after only two press passes were issued to the away club he was covering, Havant & Waterlooville, and they were given to that club’s own media staff.

As Yogi Berra said, you can observe a lot by just watching.