ANTON RIPPON remembers a bygone age of local newspapers, where most of the equipment were museum pieces even while they were still in use

At the recent SJA British Sports Journalism Awards one of my table companions told me that his 11-year-old son had no idea what a typewriter is. And when you stop to think about it, why would he unless he had been to a museum? 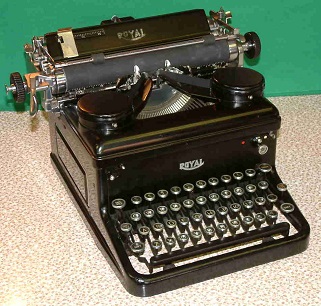 I’ve still got an old manual machine gathering dust in the loft. I’m loath to throw it out in case the Russians turn off our electricity. Anyway, it’s comforting to have handy a reminder of times when – at least according to the rose-tinted eye of memory – all was cosy and well with your world, and there wasn’t much in the way of innovation (although I do remember getting overexcited at the arrival of Tipp-Ex).

As memories come flooding back, of copy paper, carbons (“blacks”), tobacco smoke and buildings shaking to their foundations whenever an edition was being printed, I realise how much I mourn the passing of the town-centre newspaper office.

They were convenient places where readers could hand in a story, plead in vain for the non-publication of a shoplifting case “because it would kill my mother”, book advertisements and claim their 10s 6d for being the face in the frame on a photograph of a football crowd.

The former offices of the Derby Evening Telegraph still stand in the centre of my hometown, a handsome green-domed former Corn Exchange and Palais de Dance. The composing room is now a snooker hall, the front office an employment exchange. The narrow cobbled lane where vans queued to load up with Saturday night Green ’Uns is now deserted. The identity is still there, though: the newspaper moved to purpose-built premises on the edge of town 34 years ago, yet locals still refer to “the old Telegraph building”.

The labyrinthine Nottingham Evening Post building also stood proud at the centre of the city that it served. It was a maze of corridors and it took me my first week there to work out how to return to my desk in the features department. The building was eventually demolished and, again, a newspaper took leave of its central location.

And so it has gone on, newspaper after newspaper in towns and cities across Britain, abandoning the very focal point of their areas of influence to park themselves on some soulless industrial estate, probably not even on a bus route to ease the journey for Auntie Flo who wants to buy a back number from a week last Thursday. You have to wonder how the cutting of that direct connection with the community that they serve has contributed to many local newspapers’ declining circulations.

Vanished, too, is the office pub, although they tell me that the days are long gone when not joining in lengthy liquid lunches was a poor career move.

I do believe that such things are now actively discouraged, which is a pity because our office pub in Burton upon Trent was patronised by a host of wonderful characters like Sauce Room John (he worked in a pickle factory) and Giro Joe, who, so far as anyone knew, had never worked for even one day of his 50-something years.

I certainly enjoyed my days at the district office, right in the middle of Burton. It is also another reminder of how technology has changed.

Every time there was a race meeting at Uttoxeter, the Telegraph hired the front room of a house near the course and despatched one of us, together with a van driver and a newspaper seller. Results from other meetings were phoned through, typed up on a stencil (don’t forget to remove the typewriter ribbon first) and then hand-stamped into the fudge, or stop-press.

I enjoyed my turn there, along with Sam, the newspaper seller who had survived the sinking of the SS Lancastria following the BEF evacuation from Dunkirk, and “Squeak”, the van driver with the high-pitched voice, who looked like a taller version of Arthur Askey and who had a host of wise sayings including: “A man who works for nothing is never out of a job.” I used that most recently in 2012 when someone from the BBC wanted me to spend three days working on an Olympic Games project for no reward other than “the warm glow of hearing your voice on the radio”.

It is that district office at Burton that brings me back to the subject of typewriters. The chief reporter was a large, bearded man called Dave Stacey, who rode a motorcycle. We enjoyed plenty of high jinks and when a junior reporter called Mark Sharman was posted to us, they assumed even greater levels of invention.

Mark, by the way, went on to become, among the holder of several high offices in television, controller of sport at first Sky, then Channel 4, and then ITV.

I wonder if he recalls the day we took Dave Stacey’s motorcycle crash helmet and suspended it from a hook in the very high ceiling of the reporters’ room. To retrieve the helmet so that he could go out on a job, Dave had to drag a desk across the room, pile up a few of the bound volumes of back numbers that we kept, and then precariously balance on them to unhook his helmet.

Unfortunately he was in a bad mood that day and, to make room on the desk for his high-wire act, he threw a typewriter on the floor. To our horror, the carriage shot straight off across the room. Damaging company property was obviously frowned upon, but Dave would have nothing to do with it.

“It’s your fault for buggering about, so you can get it mended,” he said as he stormed out. We found a typewriter repair shop near Burton Town Hall and showed the machine, now in two parts, to the proprietor. He scratched his head, disappeared into the back of the shop and returned several minutes later with a dog-eared catalogue. It turned out that the typewriter (they were usually passed to editorial only after the accounts department had finished with them) had been made in Leipzig some time before the First World War. It was irreparable, so we took it back and put it on an empty desk; it was still there, gathering dust, when I left seven years later.

By the way, there were no grudges. I still enjoy the occasional fish and chips lunch with Dave Stacey, now in his 80s. Happy days …