Odette Butson combines freelance athletics writing with work in the police. “I actively compete in and follow athletics, but I also write features and interviews for Backtrack magazine (the offical magazine of the British Athletics Supporters’ Club), including reports on the Olympics and the Paralympic World Cup,” she says.

Covering the Plymouth Half-marathon in 2003 for AW collating results and preparing a short report the event. I think I earned the grand total of £6.00

What has been your most memorable assignment during your career?

My most memorable was writing a report on the Loughborough International in 2004 highlighting my future picks for stardom as Christine Ohurogu (relatively unknown at that point). She went on to run 50.50 for the 400 metres at the AAA trials and has since gone on to win Commonwealth gold. The same article pointed to the potential of a young Steven Lewis won bronze at the Commonwealth Games in the pole vault. 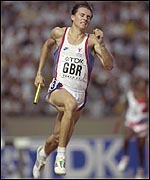 How Long’s the Course by Roger Black. It is not necessarily the best written but the story had meaning to me personally. I had been very ill at the time of reading it and finding out that Roger had battled a heart condition during his career as well as the Epstein Barr virus made me more determined to fight my illness and get what I wanted out of life.

Can I have two? The most obvious would be Paula Radcliffe, which probably needs no explanation. There is an extra affinity in that we share the same birthday and asthma (but not the same athletic ability).

The second would be Tatyana Lysenko, the Russian hammer thrower (pictured, right).

She is an incredible role model for women hammer throwers as she is lean but very strong and exceptionally fast across the circle. I think she can break the 80-metre barrier in the next few years. I hope the perception that women hammer throwers need to be “large” will be rewritten and the event will lose some of its stigma which must surely put off self-conscious youngsters from pursuing this as an event.

Dr Who: Tom Baker or David Tennant?Tom Baker was the Doctor when I first watched it, so the original is still the best

Coe or Ovett? Tough one. I would have said Coe, but he became my MP when I lived in Camborne in the early 1990s. So I think I’ll go with Ovett.

Flintoff or Botham? Got to be Beefy.

Read our SJA survey on women on the sports desk here

What’s sex got to do with it?

And find out how you can join the SJA by clicking here.