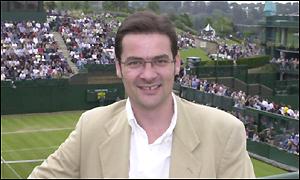 completes the SJA Questionnaire and tells of his admiration for Brian Lara and David Gower, Paul Hayward and Oliver Holt, and Chevy Chase.

Carter has been in the BBC golf job for four years, having previously been BBC Radio’s tennis correspondent for five years after joining from World Service in 1995.

While at World Service, he covered cricket and rugby union, having started his career in local radio in the Midlands, all after completing the NCTJ pre-entry course in Sheffield.

My first commentary was on an England v Scotland volleyball match while working as a freelance helper at BBC Radio Leicester. I had been dispatched to the match because all the other sport had been frozen off. It was the first time I’d seen the sport and they came to me for match point. Several were saved and I had to commentate single handedly for around 20 minutes, though it seemed a lot longer at the time!

So many from which to choose. Probably covering England’s cricket tour of the West Indies in 1994. Brian Lara scored his 375 and I had arranged to interview him on the rest day for the World Service. Despite becoming the hottest sporting property in the world over the first three days of the match, Lara, pictured right, didn’t go back on the arrangement and I landed one of the biggest scoops of my career.

John Rawling, now ITV’s boxing commentator, was my first boss in local radio and was a constant source of advice and encouragament. Iain Thomas was an inspirational leader of BBC World Service Sport and broadened my horizons beyond imagination. My current boss Gordon Turnbull combines all those qualities and is as fairminded a boss as one could wish to have. I

What has been your favourite sports-related movie? 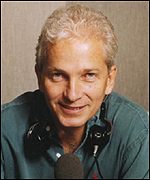 David Gower (pictured right). He played with such grace and skill and always gave the impression that there was more to life than cricket. As a youngster at Grace Road, I loved watching him play.

What is the latest task you have been working on – was it good, bad or indifferent?

Covering the Alfred Dunhill Links Championship golf – always a good week, but I’m rather jaded after seven straight weeks on the road.

What is really the worst thing about your job?

Time away from home and the long hours. Having done cricket, tennis and now golf I sometimes crave a sport that lasts only a couple of hours. Having said that, I love my job.

I’m a failed accountancy student so it wouldn’t be that! Probably something to do with the law. I found my time as an agency court reporter fascinating.

Skiing with my family

What sports event would you most like to attend as a spectator?

What would be your first choice of car?

When I retire I want to buy a Porsche – it will need to be about 20 years old for me to be able to afford it.

All of my fellow golf correspondents, Hayward, Holt, Samuel and Martin Johnson. Also I try not to miss Martin Kelner’s Screen Break in the Guardian.

Get a grounding at a local level, whether in newspapers or radio and work in news before gravitating towards sport.

Find out about SJA-endorsed training courses by clicking here.

And find out more about the SJA by clicking here.