NORMAN GILLER pays tribute to Ian Willars, wonders about the online paywall for The Sun, and joins Mark Ogden, Harry Harris and Paddy Power in the race for a football exclusive

When is an exclusive not an exclusive? The Daily Telegraph claimed with some justification that their ear-to-the-ground Manchester reporter Mark Ogden was first with the earthquaking story of Alex Ferguson’s retirement.

But it was there for anybody to put two and two together when bookmakers Paddy Power on Monday May 6 suddenly chopped the odds on David Moyes taking over at Old Trafford for a vacancy that did not exist.

I think their well-informed blogger Josh Powell deserves at least a share of the praise for breaking the story: this was his heads-up alert hours before Fleet Street got a sniff. 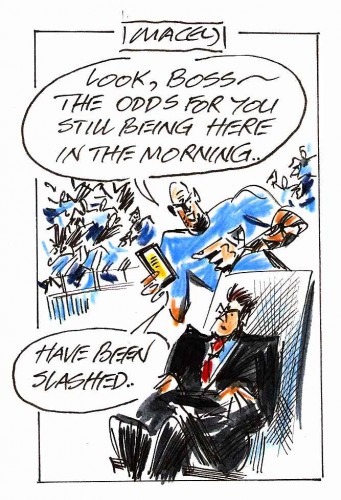 Anybody who keeps an eye on Twitter would have seen Paddy Power constantly banging on about heavy overnight betting on Moyes moving to United. Those football journos who thought it was a ruse to bring in more punters will be kicking themselves. But let me take nothing away from Ogden, who had the courage to turn rumour into fact at a time when Fergie’s own programme notes were trumpeting how he had no intention of retiring and was looking forward “to being part of something special.”

Mark was then supported by the Telegraph website executives, who decided to go online with the story on the Tuesday evening, while other Manchester football reporters were still trying to stand up the rumours for their newspapers.

It has triggered the now common controversy of whether to hold back stories for print or go with the instant glory online, where any breaking news is snatched for world consumption within seconds of appearing on the web.

The old warhorse Harry Harris, who has had more exclusives than Fergie has had titles, could not resist reminding me that he wrote that Sir Alex would be retiring at the end of this season as long ago as May last year. His source was Wigan Athletic chairman, Dave Whelan, who is closer than most to the Master of Old Trafford.

Now Harry is rushing out a book featuring Fergie’s 13 Premier League title wins (taking the United collection to 20 championships) and is calling it 20/13. Geddit?

It is Harry’s 70th book, all of them with football themes. He claims it is some sort of a record. Only 50-odd of the 94 books that I have had published have a football slant. Don’t you just hate these people who jump on the bandwagon? Oh, one more thing: You can buy the Ferguson The Legend DVD that I have scripted for a Father’s Day present on June 16. Opportunistic, moi?

MY REGULAR READER will know that I have many times reported here in my SJA safe house that Rupert Murdoch is crazy enough to put The Sun online edition behind a paywall, along with The Times and Sunday Times.

Well, now he has proved me right with the announcement that a £2-a-week fee will be charged for access to The Sun website from August 1, with the launch of Sun+.

That should mean millions more hits for the free Mail and Guardian websites that are already the most popular newspaper sites for surfers across the worldwide web.

The Sun retreat behind the Wapping Wall coincides with the three-year deal that NewsCorp have for showing top-flight football clips on line.

Mike Darcey, chief executive of News International, said: “Sun+ is a fantastic new package which provides readers with exclusive access to an ever increasing bundle of products, services and offers at an unbeatable price. This move ensures we will be offering a compelling paid-for package across all our titles, delivering great value for news that is worth paying for.

“With the addition of the Premier League clips, we will be able to build on The Times’ credentials as Sports Newspaper of the Year, The Sun’s reputation as the paper for football and The Sunday Times’ renowned in-depth analysis and comment.”

He would say that. I bet the hits for The Sun website drop by a huge percentage the second the wall goes up. I wonder what odds I can get from in-the-know Paddy Power?

ANOTHER GIANT OAK of a sportswriter has been cut down with the sad passing of Ian Willars. My memories of Ian go back 50 years to when we were young Turks on the Daily Herald. He was always an inquisitive and amusing companion, who had an encyclopedic knowledge of Midlands football and was a walking record book on county cricket in general and Warwickshire in particular.

A journalist out of the old school, he always did his homework and had an impressive book of contacts, all of whom welcomed his calls. Ian, a precisely-spoken, sophisticated man who we nicknamed The Duke, was an exceptional newspaperman in an era when print was king.

On the Birmingham Mail, he was known as Two Jackets. To those uninitiated young journos who wondered why he brought two to the office, he would explain that one was for wearing and the other to hang over the back of his chair so that his superiors thought he was working while he was having a crafty tipple at the Queen’s Head.

Ian was a popular personality in the “golden days” of the Midlands when the team of reporters read like a who’s who of football writing masters: Alan Williams and Joe Melling of the Express, Hugh Jamieson and Bob Driscoll of The Sun, Jeff Farmer on the Mail and Peter Batt on the People. Also on that busy beat were Dave Horridge, Colin Malam, Dennis Shaw, Ray Matts, Dave Harrison and John Moxley.

They all knew how to live as well as report and any Fleet Street-based journalist visiting their territory was royally looked after, with Ian a jovial leader of their bar team. Happy days. Rest easy, old friend.