Ivor Davis has covered US Presidential elections, world heavyweight title fights, mass murders, space shuttles, and the first Beatles tour of the America, but it took an English football match at the weekend to give him one of his most depressing experiences.

London-born Davis has been based in California for more than 50 years, but has always kept in touch with the game he played better than most as a top-flight amateur winger back in the 1950s. 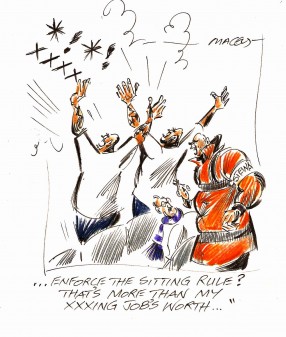 Ivor and I have been pals since working together on the Stratford Express in the foothills of our journalistic careers, and I was chief football reporter on the Daily Express when he was our man on the west coast building a huge international reputation with Hollywood scoops and celebrity features.

Now in his late 70s, Ivor decided to treat his soccer-mad son, Gideon, and 10-year-old grandson, Levi, to a trip to the England to as many matches as possible in seven days. Now read this depressing email from Ivor:

“A wonderful trip was wrecked by our visit to see the West Ham/Tottenham match on Saturday. We went to Arsenal, Chelsea, Fulham, Charlton and Watford, and were happy with the football, the atmosphere and the facilities.

“Then at Upton Park – my old hunting ground as a reporter in Ted Fenton’s days in the 1950s – we were appalled by the behaviour of the fans and the discomfort and danger of watching the football,” Davis wrote.

“We paid £52 for each of our tickets in the Spurs away section. I was astonished at the language and chanting from the Spurs supporters, which was bawdy, often vile and foul-mouthed. The worst I’ve heard for a long time. My 10-year-old grandson learned lots of new songs – unfortunately. The abuse hurled at their own players and manager made me wonder if perhaps they were West Ham fans in disguise.

“But my biggest complaint is this: 50-plus years ago I used to watch Spurs while standing on the terraces for 90 minutes for my shilling entrance money. On Saturday I had to stand, despite having paid an exorbitant price for a seat.

“Everyone stood for the entire game, so we were forced to stand as well, having paid to sit! In my late 70s, it was no fun. It was hard going for me and even for my grandson, who had to stand on his seat throughout the game.

“Most annoying was to hear the abuse and gutter language, which makes me despondent about the ‘old’ country. I feel very strongly that the stewards should have done more to make the fans sit.”

Like me, Ivor wonders whatever happened to respect and tolerance. It was a disturbing experience, and he assures me that American sports fans are better mannered and more sporting.

There is an on-going campaign to re-introduce standing areas to grounds, with the horrors of Hillsborough somehow pushed out of mind.

Some clubs are strict in enforcing the all-sitting rule demanded by the Football Spectators Act 1989, while others turn a blind eye.

It seems nonsense to me that spectators pay inflated prices for seats and then stand, but as I’ve always been spoiled with the comfort and convenience of a press box seat, what do I know?

What I do know is that Ivor Davis is a reasonable, balanced and intelligent spectator, and he returns to the United States with a less than favourable opinion of watching football in the land of his birth.

Once back in his adopted home, he will be publishing a book about the historic Beatles tour in the 1960s, when he travelled with the Fab Four as ghostwriter for George Harrison.

Like his visit back to West Ham, it was a Hard Day’s Night.

A NOTE FROM MY “taking people for granted” department: what a superb sports presenter the BBC has in Hazel Irvine, who anchored the marathon coverage of the world snooker championship with consummate ease and supreme professionalism.

She coaxed a queue (or even a cue) of gnarled old players through their summaries, convincing all of us in our armchairs and on our sofas that we were expert witnesses of the table wizardry of Mark Selby, Ronnie O’Sullivan and company.

I first noted Hazel’s potential when she appeared alongside the old master Dickie Davies during ITV’s coverage of the 1988 summer Olympics. I have watched her grow into a skilled, never-ruffled all-rounder who is comfortable presenting sports across the board.

Hazel, who will not thank me for telling you that she hits the half century next year, should not be taken for granted, and could teach a lot of the male presenters about the importance of doing their homework and allowing the picture and the interviewee to tell the story.

THE DEATH OF Leslie Thomas reminded me of an occasion when I was forced to stand through a major sports event, though not as uncomfortably as Ivor Davis.

Leslie was a writer of exceptional talent and, more important, a lovely man. He wrote his best seller Virgin Soldiers while working as a reporter on the late, lamented London Evening News. At the time I was a copyboy on the paper when, in 1956, the newly knighted and newly retired Sir Len Hutton was signed to “write” on the Ashes series.

EM Wellings, an Oxford Blue and former Surrey off-spinner and the News’ cricket correspondent since the end of the war, went purple-faced apoplectic when he heard of Hutton’s appointment.

I just happened to be in “the sportswriters room” at Ludgate House when he was told that Hutton would be commenting at the Lord’s Test. “The fuck he will,” snapped Wellings.

Wellings was an awfully posh man with a cut-glass accent who always wore either a cravat or an MCC tie. To hear the “F” word falling from the lips of Wellings was as shocking to the ears as hearing your maiden aunt cussing.

Wellings was not revolting against Hutton becoming his unwelcome team mate so much as the fact that his copy would be ghost-written. This was a tinderbox issue throughout Fleet Street at the time, with the NUJ leading the fight against the employment of non-journalist sportswriters.

Using his influence as a distinguished founder member of the Cricket Writers’ Club, Wellings managed to get Hutton barred from the press box at Lord’s.

The compromise was that three seats were made available alongside the covered, glass-fronted press box: one for Sir Len, one for his ghost, Julian Holland (later the driving force of BBC’s News At One programme), and one for the copy telephonist – little me.

I was not allowed to use a press box telephone, and had to gallop downstairs to a public phone box every 20 minutes, or at the fall of a wicket. If the phone was being used by one of the 20,000 spectators, I would then have to race outside the ground to another call box, with Hutton’s priceless thoughts on a sheet of paper in my hand.

BBC television was covering the match live, and when commentator Brian Johnston referred to the “Hutton barred” story, the cameras panned the press box and then showed Sir Len on the outside, giving his considered views to the typewriter-tapping Holland.

Wellings was tipped off that the cameras kept showing close ups of him and Hutton just yards apart. He waited his moment, and when the camera next started on a panning shot, he held up a foolscap pad on which he had written in large block capitals: BOLLOCKS.

I was a member of the NATSOPA union at the time, and got a rollocking from our FoC for being an innocent (I thought) co-conspirator in the union-breaking ghosting of Hutton.

After one dash downstairs with the copy, I returned breathlessly to my seat to find it occupied by an Evening News reporter on a day off. It was Leslie, who in his spare time was writing the book that was to earn him his fame and fortune.

Over the next 50-plus years I often reminded Leslie how he graciously allowed me to stand beside him while he sat on my chair. He was always humorous and modest company, omniscient on most major sports and in particular his first-love of football club Queen’s Park Rangers.

There is a punchline: Wellings (full name Evelyn Maitland Wellings) wrote for the Evening News for 36 years until it became unlovingly embraced by the Evening Standard in 1980. He received a letter about pension entitlements from the Associated Newspapers management that read: “Dear Mrs Wellings …”