What’s in a name? After Chris Hoy called foul, NORMAN GILLER admits he might have had one Vera Lynn too many, but thinks that a new News of the World is a better bet than a seven-day Sun 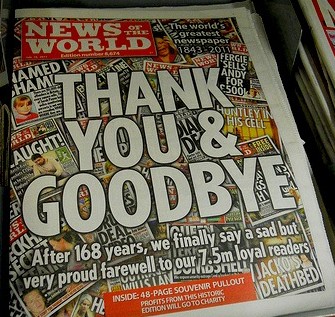 I am not alone in thinking there is a future for the News of the World, and that it should be resurrected from its early grave. Several of my old mates who served the paper well have suggested I get behind a campaign to resuscitate the old lady of Fleet Street.

A “Bring Back the News of the World” campaign has started on Facebook, and has been given fresh impetus by the distinct likelihood that it was not a News of the World employee who deleted messages from Milly Dowler’s voicemail. It was this turn of events which led to the Murdochs killing off a 186-year-old newspaper and pushing a crowd of top-flight and decent journalists on to the unemployment queue.

The Milly Dowler story hitting the fan turned casual interest in the hacking-of-celebrities theme into a public outcry against the News of the World in particular and journalists in general. The Murdochs closed the biggest-seilling paper in the land because their advertisers – not only in the newspaper, but more importantly on their satellite TV channels – were being driven away by revulsion over the Dowler issue.

Nobody can condone the phone hacking and many of the story-gathering techniques that have come to light during the Leveson Inquiry. The guilty must be punished, but there was much about the News of the World that was public-spirited and the journalism – particularly on the sports side – of a high quality. It was not so long ago, for instance, that the Fake Sheikh’s Pakistan betting sting story was winning the SJA’s Sports Scoop of the Year.

The chances of there being a “New” News of the World are distant, mainly because of the poorly kept secret at Wapping that a Sun on Sunday is being prepared for a 2012 launch.

But if I was in charge at News International – which would be like the clown running the circus – I would seriously consider reviving the NotW, with a pledge to report the truth and nothing but the truth, and gathering it under the new guidelines that will be coming from Leveson. There are more than 5 million readers who would quickly welcome back their old friend, and they are beginning to make themselves heard on the social networks that, these days, carry much more weight than newspapers.

I would be delighted to see a lot of my talented old mates get their jobs and their pride back.

TWITTERSVILLE has been alive with the sound of laughter this week with the mix-up of football referee Chris Foy and the cycling master Sir Chris Hoy.

Foy, for it was he, gave one of the season’s most controversial performances when he made a procession of wrong decisions during Tottenham’s 2-1 defeat at Stoke (ok, I admit to being Spurs-biased, but these were huge howlers regardless of the colour of your glasses).

On Facebook and Twitter, keyboard warriors decided it was Chris Hoy rather than Chris Foy who had been the whistling fool.

After getting battered from near post to far post, Sir Chris was finally moved to Tweet: “Just for the record 1) I don’t need glasses and 2) I do not lead a double life as an English Premier League ref. That’s Chris Foy.”

He added later in 140 characters or fewer, “Still getting some rather amusing grief from Spurs fans! On the plus side I’ve learned some new 4 letter words today.”

I can’t be too critical over somebody getting names mixed up. I am the man who once wrote a crossword clue for The Sun that read: “She was the last woman to be hanged in Britain.”

The answer, of course, was Ruth Ellis. In the next day’s paper it read (and I was the person who typed it): “Vera Lynn”. If we meet again some sunny day – don’t know where, don’t know when – I reckon Dame Vera will push me over the white cliffs of Dover.

CALLING ALL SJA MEMBERS: Make sure that your contact details and brief biog are up to date for 2012 Olympic Year. Send a revised biography to the SJA Yearbook editor Paul Trow by clicking here