Who says sport and politics don’t mix? After Gordon Brown tried to get a pre-election appearance on Match of the Day, NORMAN GILLER examines the sporting CVs of past residents of No10 Downing Street

A quick check of the calendar: nope, it’s not April 1. Prime Minister Gordon Brown really was asking to appear as a sofa guest on BBC’s Match of the Day 2. There could be a whole new career opening up for him after the General Election, unless ‚Ä” as the polls are suggesting ‚Ä” he gets hung.

A few ideas for Gordon’s spin surgeons (and in the interest of political balance, also for the attention of David Cameron and Nick Clegg) for future on-screen jobs.

Weather forecaster for the day, predicting only blue skies and blaming approaching storms on the global turmoil.

EastEnders, behind the bar at the Queen Vic and using quantitative easing on the pumps.

Countdown, “five small ones and one big one, please Rachel ‚Ä¶”

Deal or No Deal, telling the Banker what he can do with his red box.

With Gordon desperate to show that he is a man-of-the-people football fan (although Raith Rovers is stretching it a bit), I thought I would look into the sporting interests that PMs of my lifetime have had ‚Ä¶

Winston Churchill was an avid polo player (he was a cavalry officer in his younger years), as our picture below shows. He was passably good at tennis, but he famously said of golf: “It is a game in which the aim is to hit a very small ball into an even smaller hole with weapons singularly ill-designed for the purpose.”

Clement Attlee was a keen cyclist when a young politician, riding from Essex to Somerset to spread the word of David Lloyd George’s National Insurance Act of 1911. He was 25 years ahead of Norman Tebbit’s Dad with getting on his bike.

Anthony Eden excelled at cricket, rugby and rowing at Eton, and represented his regiment while serving as a captain in the First World War.

Alec Douglas-Hume remains the only PM to have played cricket a first-class level ‚Ä” for MCC, Middlesex and Oxford University, when he was known as Lord Dunglass. He later served as MCC President.

Harold Wilson, pictured right, could reel off the names of the Huddersfield team that won the First Division three times in a row under Herbert Chapman, and often quoted Yorkshire cricket figures from Wisden.

Ted Heath was, of course, a master yachtsman who led Britain’s winning team in the Admiral’s Cup in 1971, when he was pipped to the BBC Sports Personality of the Year award by Henry Cooper.

Jim Callaghan played tennis to a high standard (he met his wife at a tennis club), and followed rugby closely. He admitted to being torn when England played Wales. Portsmouth born, he became Lord Callaghan of Cardiff, his constituency for 45 years.

was also a scratch golfer (pictured left with a young Nick Faldo). After she left No10, they retired to a house close to Denis’s Dulwich and Sydenham Golf Club. Once asked if she had any interest in sport, Maggie said: “I have too many other things to do.” Their son, Mark, was a rally driver not very good at navigating.

John Major was a good-class club cricketer before a leg injury forced his premature retirement. He is a respected historian on the game and has held prestigious posts with Surrey and the MCC. Sir John is also an avid Chelsea watcher.

Tony Blair is a Newcastle United supporter who once showed off his football skills in a head-tennis stunt with the then Toon manager Kevin Keegan. London putting in a serious Olympic bid was part of Blair’s 1997 manifesto. Since leaving Parliament, he has set up the Tony Blair Sports Foundation.

Gordon Brown lost the sight of an eye 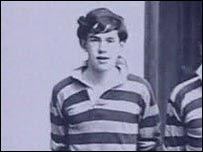 following a rugby injury while at school, but has followed all sports closely. And also Raith Rovers.

I do not apologise for retelling the following Harold Wilson tale, which is little known but a sports story worthy of a place in the SJA vaults.

My then business partner Peter Lorenzo and I organised a testimonial dinner for Sir Alf Ramsey at London‚Äôs Caf√© Royal in 1974, to try to make up for the fact that the Football Association had kicked out England‚Äôs World Cup-winning manager with a tissue handshake of £6,500; this for the man who had made them millions over the previous 10 years.

The Prime Minister was the main speaker, and during the course of his speech a mouse ran the length of the top table. Its Speedy Gonzales sprint was cut off by Henry Cooper, who caught it in his hammer of a left fist.

Henry handed it to the chef, who in full view of everybody stamped on it. Wilson had no idea this was all going on, and as the audience roared, he thought his speech was going down a bomb.

How do you follow that? Only Geoffrey Green could. One of the most entertaining after-dinner speakers in the land, he was next to pay tribute to Sir Alf. He announced that he would now play the mouse organ. I have often wondered if he released the mouse so that he could use that joke.

He turned to Sir Alf and said: ‚ÄúAs you are now out of work, perhaps you would like to join me in a street busking team?‚Äù

Geoffrey then produced a harmonica and proceeded to play Moon River. I don‚Äôt know who was the more surprised and amused, Sir Alf or the PM. It ranks with the funniest after-dinner speeches I have ever heard. Yes, it was Geoffrey in his prime.

SJA dates for your diaries

Wed Mar 17: SJA Sporting Lunch with triathlon world champion Alistair Brownlee. Two-course lunch plus a glass of wine of beer, £20 for SJA members, £25 for non-members. To book, contact Mary Fitzhenry mary@spokepromotions.com or by phone on 020 8946 9601 or 07946 545084 (please indicate whether a vegetarian meal is required).

Mon Apr 12: A Question of Boris:The SJA’s second “Sporting Question Time”, this time with London Mayor Boris Johnson at City Hall. This will be strictly for SJA members only. To book your ticket, click here to send us an email with your name, SJA membership number and address, writing ‚ÄúSporting Question Time with Boris‚Äù in the subject field