Got a good publishing or broadcast idea? Don’t let it slip out on YouTube, warns NORMAN GILLER, who – as regulars might expect – also applauds the achievements of Gareth Bale

Ronnie O’Sullivan’s defence of his snooker world title triggers memories of a memorable week I spent with The Rocket. We were making a video about his unique cuing technique that I thought would have people queuing to buy the hour-long masterpiece.

With my co-producer – Top Gear director, Brian Klein – we hired an east London snooker hall and merged Ronnie’s fabled table feats with action from the best 147s ever recorded, including his astonishing world record maximum in 5min 20sec.

A certain best-seller, surely? But no, it has moved as slowly as a Terry Griffiths or Peter Ebdon break. This week I discovered just why.

The entire video has been uploaded on to YouTube – have a peep here  – and is available for nothing. All the work we put into it, not counting the hundreds of pounds for film rights, and there it is to be enjoyed for not a penny piece. The anonymous person who decided to share our work with the world exposes the curse of the internet.

Authors, journalists, artists, producers and directors are getting ripped off by pirates and plagiarists, and something must be done to stop them. A huge percentage of what you see on YouTube has been uploaded illegally, without thought of copyright or intellectual property.

It is destroying the music industry, and – as we recenty learned on this website from our SJA publishing colleague Randall Northam – Amazon is wrecking the book world.

I hate censorship and regulation, but how else can you stop the pirates and the pilferers?

How about charging people to upload to YouTube, with all money going to charity? If they have to pay for the privilege of having their uploads on the internet, it might make people think twice before being so generous in sharing other people’s work.

WATCHING GARETH BALE receive his PFA Player and Young Player of the Year awards this week reminded me that it was only the day before yesterday that Spurs fans used to groan when his name was announced in the team.

He was known as Gareth the Jinx after failing to be in a winning Tottenham team in his first 24 games. 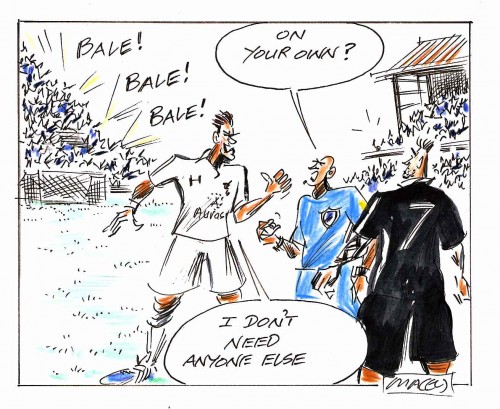 There was talk of him joining Birmingham City for £3 million, and many Spurs supporters would have thought he was overpriced.

I had more faith in Bale because I had been tipped off about him four years earlier by Lawrie McMenemy, who still had his ear to the ground at Southampton.

“There are two young players at Southampton who are going to make a huge impact,” Lawrie told me when we sat next to each other at Hampshire’s Concorde jazz club, where we are both honorary members. “Watch out for Theo Walcott and Gareth Bale.”

At the time they were sharing digs, and in those early days Gareth used to say his dream was to play abroad with a team like Barcelona or Real Madrid. It is a dream that could come true this summer if Spurs fail to make it into the top four to clinch Champions’ League football. Chairman Daniel Levy is certain to be tempted by a cheque for £60 million, which would be a huge deposit on Tottenham’s planned new stadium. I am assured by German contacts that incoming Bayern Munich manager Pep Guardiola has Bale top of his wanted list.

I am watching the situation closer than most, because if Bale stays at Tottenham I will be self-publishing a book about him and the rest of the Welsh Wizards who have worn the Spurs shirt.

That is unless somebody steals the idea and publishes it online.