Let no one think NORMAN GILLER carries a grudge. Forty years on, he takes issue with old colleague James Lawton over a once-cherished robe 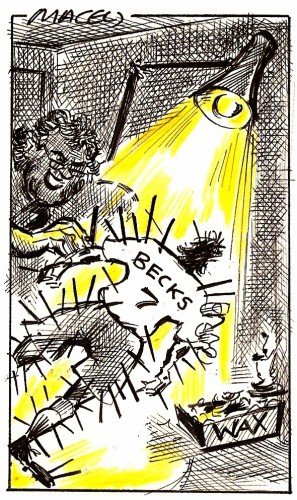 Did David Beckham run over James Lawton’s cat? There has to be a reason for the one-man war that Lawton has waged on Becks ever since brilliantly filling the columnist’s chair at The Independent.

The will-he-won’t-he-play-for-Spurs saga gave James the chance to reach yet again for his vitriolic Beckham-bashing vocabulary, levelling a charge of insanity at Tottenham and Harry Redknapp for even considering signing “a genius of self-enhancing public relations.”

It was the latest in a long line of articles in which Lawton has taken Beckham apart with surgeon-like precision, cutting him open and holding his Golden Balls up for ridicule.

At this rate James could provoke the sort of reaction that once motivated Vivian Richards into taking time out from a Test match to have a face-to-face (almost fist to face) showdown with him in the press box. Viv did not take kindly to being vivisected by the Lawton scalpel.

James, up there with Patrick Collins and Martin Samuel as the finest of modern sportswriters, would, I sense, be less concerned about a physical confrontation with Becks than the volcanic Richards.

He and I used to run together in our early Daily Express days when building the foundation to our roads paved with words. He was one of the most affable and affectionate chaps you could wish to meet, always with a cherubic smile and with only good things to say about people.

His early patch was Manchester and he made a name for himself by putting wise words into the mouth of Malcolm Allison in an outstanding ghosted column in the northern edition of the Express. Shy, retiring Big Mal once told me: “Jim makes me comes across as the genius that I am.”

James seemed to grow an extra set of teeth after sharpening his blade as an acerbic columnist on the Vancouver Sun, and since returning to Fleet Street has written some of the most powerful and provocative sporting prose of any time.

I will counter my admiration of Lawton the writer with admitting to disappointment in Lawton the man.

Many moons ago I held out the hand of friendship and invited him to stay overnight at my then home in Ilford. He borrowed my dressing gown and wandered around in it for several hours.

Now how do I put this? I was thin. Jim was not.

My wife described me in the gown as looking like Noël Coward. Lawton’s entrance for breakfast was more that of Charles Laughton playing Henry VIII.

By the time he returned the beautifully tailored robe it was stretched and misshapen. I had loaned him a gown, and he returned a tent. Gentleman Jim was full of apologies and promised to replace the garment.

Here we are, a little matter of 40-odd years later, and I have yet to receive a new dressing gown. There’s something about this generation of sports columnists. Patrick Collins once borrowed an umbrella from me and I had to send him insulting notes before he deigned to return it.

Call me a bitter old hack, but I just thought it time I gave James Lawton a public dressing down over what he did to my dressing gown.

Where do I stand on the Beckham topic? His presence would strengthen, not weaken, the Spurs squad. Thimples. All Redknapp wanted was to have his right foot for a while. It certainly did not warrant the thumping Harry Boy got from The Independent’s man in a dressing gown.

Goodness knows what James will write when Becks gets his knighthood.

HAVING watched every single ball of the Ashes series, I was desperate to knock and mock the Mickey Mouse Twenty20 version of the game. It should not be called cricket, but crackit.

I was all set with my poison pen (not quite in the Lawton class) ready to disparage the first Twenty20 match between Australia and England in Adelaide but became completely enraptured.

It was as exciting and entertaining as sport can be as England won off the last ball with the winning runs struck by Chris Woakes, who looks schoolboyish but plays with a maturity beyond his years.

I could not find anything negative to say about it, and I bet the Americans eventually adopt the game in a big way and make it truly international.

But it still ain’t cricket.

LOVELY Gary Mason died a year to the day that I last saw him. It was at the funeral of his former manager and my best mate Terry Lawless, and I was privileged to give the eulogy.

Afterwards, I had a long chat with Gary and I reminded him of the first time we met.

Terry summoned me to the Royal Oak gym in Canning Town early in 1984. “Come and meet our next heavyweight hope,” he said. “Let’s see what publicity ideas we can come up with.”

I walked into the gym and held out my hand to shake Gary’s. He took my hand in his mighty mitt, spun me around and all in the same movement managed to fit me into a leather jacket.

It was one of a consignment that had fallen off a lorry, and Gary – a big, beaming DelBoy character – sold me the jacket that hangs in my wardrobe to this day, a few hangers along from an old misshapen dressing gown.

Gary was a more natural and better all-round fighter than our mutual mate Frank Bruno, but he lacked Frank’s dedication. His only defeat was by Lennox Lewis, and he was giving him a good argument until an always troublesome eye closed and left him half blind.

He was continually looking for a way to make a quick buck after being forced to retire because of his eye problems. His easy-going, laid-back style of chatting was made for TV punditry and he was doing well until getting kicked off Sky for uttering the “F” word.

“They told me to chat as if I was speaking to a guy in the pub,” he told me. “I took it too literally.”

He tried rugby league, and then organised a nationwide arm-wrestling competition, and made the silly mistake of putting his own money into the venture. The public gave it the elbow. “I did my bollocks,” Gary told me, as if talking to the man in the pub. “I had to sign on, and had the embarrassment of having people ask me for my autograph while queuing to get my dole money.”

He was a larger than life personality, a lady-liking party animal even when in training and with an infectious grin that made you warm to him and enjoy his company. I loved the bloke.

Gary was always good copy and all boxing writers will I know agree that the world is a less happy place without him. Rest easy Big Man.