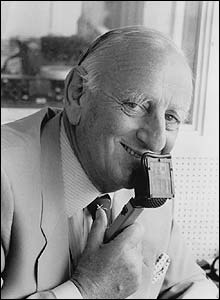 who legendarily had “the bowler’s Holding, the batsman’s Willey”

“And England have won the Ashes â€¦” Those words, called in a sing-song voice by Brian Johnston at the BBC television microphone in 1953, will echo this week to those of a certain age as England and Australia battle to the death at The Oval.

Johnners, a regular visitor to the This Is Your Life set during my 14 years as a member of the scriptwriting team, was one of the most unforgettable characters to cross my path, and I always greeted him with the chant: “And England have won the Ashes …”

For me, it is up there as a memorable moment of commentary along with Kenneth Wolstenholme’s “They think it’s all over …” as Geoff Hurst powered England’s fourth goal in the 1966 World Cup final.

Brian and I agreed that it could have been set to music. “I was so excited,” he told me, “that my voice covered at least six notes in, probably, the key of C Major.”

It was an unforgettable swipe for four from Denis Compton that clinched the Ashes victory in 1953, and many comparisons can be drawn with the current final Test at The Oval.

The venue is the same, the teams are locked all square and we have the Battle of the Wounded Knee. In 1953, it was Denis Compton who played on virtually one leg. Fifty-six years on it is a modern cricket icon, Freddie Flintoff, who is playing through a knee pain barrier.

They had the sense back then to allow six days to guarantee a finish. It was all over in four days, with England winning by eight wickets for their first Ashes success for 19 long years. Surely six days would have been an idea to copy in this rain-ruined summer?

I was a sports-mad 13-year-old schoolboy when my hero Compton struck the winning runs off the friendly bowling of Arthur Morris, fittingly with his Middlesex “twin” Bill Edrich at the other end of the pitch. There was no Downing Street

party, open top bus parade or mass MBEs in those days. It was just a job well done.

How many of today’s England players could have challenged for a place in that side? I would say only Flintoff, and the stubborn Trevor “Barnacle” Bailey, still an SJA member today following his second career in the media, would not have allowed him in easily.

I will think a little sadly but very warmly of Johnners as this Test takes shape. He used to delight us with tales from the commentary box in the This Is Your Life green room, and I was always flitting around him in the hope of persuading him to let me write a book with him.

But Johnners needed a ghostwriter like Einstein needed a calculator, and he wrote 17 excellent books under his own steam.

I wonder how many of you know that Eton- and Oxford-educated Johnston was the grandson of the governor of the Bank of England, that he won the Military Cross as a wartime member of the Grenadier Guards, and worked in the family coffee business in Brazil before following his ambition as an all-round broadcaster, specialising in his first love of cricket.

He was much, much more than just a cricket commentator. Brian was a national institution and more famous and feted than most of the people about whom he broadcast.

An ad-libbed joke was never far from his lips, as in his very first live radio broadcast – covering the disposal of an unexploded bomb discovered in Hyde Park. He reported the event from inside a nearby ladies’ lavatory. Only Johnners, the prince of punsters, could dare come out with the line: “I must admit to feeling a bit flushed.”

He was a regular with the BBC television commentary team until dropped unceremoniously in 1970 as former sports stars took over from experienced journalists. Johnners, who never forgave the BBC producers for the way they axed him without a word of explanation, crossed to radio commentating, and became synonymous with Test Match Special.

He could not have been more contrasting to the unmatchable John Arlott, but his arrival brought a light touch and humour to the commentary box.

Everyone was given a nickname. Scorer Bill Frindall became “the Bearded Wonder” and to this day, Henry Blofeld and Jonathan Agnew are fondly known by the Johnston handles of Blowers and Aggers.

The sound of laughter was always surrounding Brian, and he will inevitably be remembered for the so-called “leg-over” incident. During the summary of a day’s play at the Oval, Aggers suggested that Ian Botham, in being out trying to step over the wicket, had failed to “get his leg over”.

Johnners was convulsed by a fit of the giggles for almost half a minute, managing only to gasp, “Oh stop it Aggers …” before dissolving, wheezing helplessly and crying into a large spotted handkerchief.

I once asked him if he really had said during a live broadcast, “And the bowler’s Holding, the batsman’s Willey.”

He gave that trademark schoolboyish grin as he replied: “If it’s a myth then this mister is very happy to claim it

On 16 May 1994, more than 2,000 people crammed into Westminster Abbey to give thanks for the life of Brian Johnston, who had died that January, aged 81. The then Prime Minister John Major gave an address, two Guardsmen played on fife and drum and the Abbey organ ended proceedings with the theme from Neighbours.

Somewhere, he is probably watching on, hoping to hear sometime in the next few days another broadcaster saying, “And England have won the Ashes â€¦”