For NORMAN GILLER, the fate of David Moyes was sealed the moment he agreed to take over as Manchester United boss from Sir Alex Ferguson

The departure of David Moyes has infected me with a severe double dose of déjà vu.

First there was the Wilf McGuinness and Sir Matt Busby saga. I was chief football writer on the Daily Express when Wilf was given “The Impossible Job” of following Sir Matt on to the Old Trafford throne at the end of the 1968-1969 season.

Back then, Wilf was also trainer with the England under-23 team and we had become good mates. He was just 31, and the chirpiest most cheerful companion you could ever wish to have.

We were both Frank Sinatra fans, and when he told me he was taking over from Sir Matt, I said jokingly: “It’s like following the Guv’nor on stage.”

By the time he faced the final curtain in December 1970, Wilf’s chirpiness had given way to severe melancholy. His hair turned white and fell out over the course of just a few weeks. It was as if he had drunk from the poisoned chalice handed to him when taking over from a legend.

It took a while, but Wilf gradually got his razor-sharp Mancunian humour back.

“I managed United for four seasons,” he said. “Spring, summer, autumn and winter.

“I would like to thank them for saving me a packet in haircuts. I just have to have my bonce polished once a year. I went into the job as Jack the Lad and came out as Kojak.”

I wonder if David Moyes will be able to match WIlf’s laugh-a-minute reminisces one day? Mind you, he has the compensating cushion of a pay-off of around £5 million. Wilf got just a few hundred quid and his old job back as trainer.

Fast forward 20 years, and one of my freelancing roles was ghosting the Jimmy Greaves column for The Sun. Manchester United were about to face Crystal Palace in an FA Cup final replay, and these were the words I put into Greavsie’s mouth:

“Defeat by Palace will surely mean the end of Alex Ferguson’s reign as Manchester United manager. He pulled off minor miracles at Aberdeen, but managing at Old Trafford is like being on a different planet, and the achievements of Sir Matt Busby continue to cast their shadow. Time is running out for Fergie, and I will be amazed if he is still in charge at United next season if Palace win the replay.” 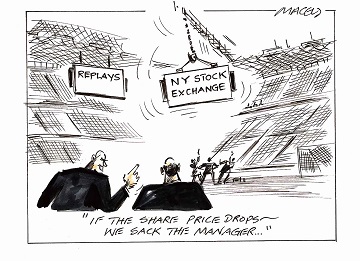 Every Tom, Dick and Harriet is having their say on the Moyes topic, all of them armed with perfect 20/20 hindsight. I thought Moyes was a good appointment at the time, and feel that he deserved at least until next Christmas to get things right. But the Glazers have their pockets to fill, and not qualifying for the Champions League was the death knell for Moyes.

With my Tottenham leanings, I am accustomed to seeing managers not given the time to get the ship on course.

The fast-food generation have taken over the world. Everything has to be now. Patience is a thing of the past.

In these days of the social network and the army of keyboard warriors, Alex Ferguson would have been chased out of Old Trafford months before the victory over Palace saved him.

I detest the new sport of get-the-manager. At Tottenham, the lynch mob has chased out Harry Redknapp, AVB and (very soon) Tim Sherwood. They have hung Moyes from the cross bar at Old Trafford, and the Scouse assassins would have had Brendan Rodgers out at Anfield a few months back.

How ironic that the last match for Moyes as United manager was at the Goodison ground where he had built his reputation as the man best suited to take over at Old Trafford.

I know a lot of Tottenham fans that wanted him at White Hart Lane in place of Harry Redknapp. Now there is hardly a soul whispering a word of support for him.

Was it Greavsie or Sinatra who said: “It’s a funny old game”?

I SEE THAT young whippersnapper Bob “Bomber” Harris is celebrating 50 years as a sportswriter.

Our paths first crossed in the 1960s when he was cutting his teeth in the “golden days” of the Midlands. The team of Brum-based reporters read like a who’s who of football writing masters: Alan Williams and Joe Melling of the Express, Hugh Jamieson and Bob Driscoll of The Sun, Jeff Farmer on the Mail, Tom Lyons and Dave Horridge on the Mirror, and Peter Batt on the People. Also on that busy beat were Colin Malam, Dennis Shaw, Ray Matts, Dave Harrison and John Moxley.

Bob always stood out with his fashion sense (!) and Brummy bonhomie, and had a contacts book to die for.

Well done, Robert. You have been a credit to our profession, and wore white suits long before Martin “Ding-Dong” Bell. Not many of the old school left. On to the century!