NORMAN GILLER waxes all lyrical as he looks forward to a return to a normal, civilised behavious this weekend – at the football

Forgive me for twisting Will the quill, but this old hack has few words of his own to explain what is happening to our green and pleasant land (© William Blake).

I have been watching the unfolding events down here in dozy, delightful Dorset with ever increasing incredulity. This is a crumbling old ruin from the Rationbook Generation. Our impoverished family lived in a bomb-blitzed London with nothing but our love to keep us warm (© Irving Berlin).

We showed respect for each other and for property. Our front door key used to hang from a hook just inside the letterbox. We knew nobody would even consider breaking in. All we need is a little respect (©Otis Redding).

Okay, now I will use my own words: It is the parents or guardians of those young louts polluting our streets and looting shops who need punishing as much as their children.

If any kids from my East End days had come home with stolen goods they would have got a good hiding and told to return them to their owners. And if we had started fires or wrecked cars, our parents would have handed us over to the police for deserved punishment.

Yes, I know many of them are from single parent families. Anybody would think that was something new. I grew up with dozens of friends who had lost their fathers in the war, or mothers in bombing raids. They did not run wild and terrorise the local community. We found ways to amuse ourselves without youth grants and molly coddling.

Sport was our big outlet, playing in the street with coats as our goalposts for football and dustbins as our wickets for cricket. We had no computers or Wii gadgets. Gameboy to us was a kid who got up after being tackled, and television was for the wealthy.

Our favourite games were twopenny-halfpenny football played on the kitchen table, and word-cricket played by pencilling out letters in newspapers and books. The boy who owned a football was king of the castle, and Subutteo and NewFooty were the flickingly-good high-tech games of the time.

I am in danger of dragging this column into Monty Python “Poor? Tha’ were luxury!”  territory, but I will suggest that today’s kids need teaching the three Rs: Responsibility, Reliability and Respect.

The Broom Brigade showed the spirit of the Blitz. As the week has gone on, the silent majority has made itself heard and we must not and will not be silenced or beaten by a few thousand louts. 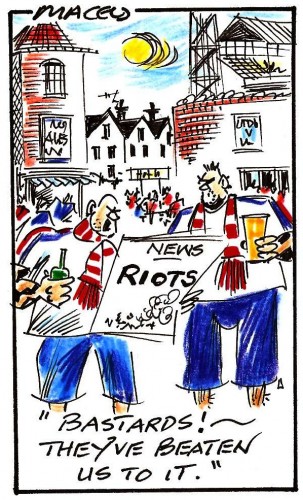 I am writing this as the news breaks that Tottenham’s opening Premier League match of the season on Saturday against Everton has been called off. The decision has come from the police rather than the football chiefs.

My brother was on the London beat for 33 years (he’s the black sheep of the family), and tells me his former colleagues are out on their feet. Many have been working 16-hour shifts and have hardly been able to get out of heavy riot gear.

The reasons for Spurs v Everton being the only casualty is that the area approaching the ground is still a crime scene, with several sections roped off, and there are health and safety factors over buildings considered unsafe.

Can you imagine the backlash on the police if a fan was badly injured by falling masonry? It is not a triumph for the louts as been suggested in some quarters, but a victory for commonsense.

The real Brit Spirit is alive and well and showing with the campaign to raise money to help support 89-year-old barber Aaron Biber, whose shop which he has run for 45 years was looted and wrecked during the Tottenham riots.

Like me, he was born in Stepney’s Cable Street and so has known the meaning of poverty. He summed the louts up much better than I could. ‘They’re meshuggenahs,” he said. For those not familiar with Yiddish, it means “crazy fools.”

In an extraordinary show of compassion and caring, more than £15,000 has been raised online to help the uninsured Aaron survive his crisis. You can make a donation here. Or go and get your Barnet cut by him the next time you go to a Tottenham game.

We must get it right for the Olympics in a year’s time or we will be shamed in the eyes of the world. I’d kick a few arses, if I ruled the world (© Lionel Bart).

TO TAKE MY MIND OFF the gloom of the riots, I have been watching England’s cricketers running riot against India, who are looking disheartened, disillusioned and disoriented as they almost certainly wave goodbye to their status as the world’s No1 Test team. If the third Test at Edgbaston was a fight, the referee would have called it off by now. The Indians looked to have thrown in the towel before the end of day two.

I go back to watching Denis Compton scoring one of his 18 centuries in the golden summer of 1947, so I have many memories to call on when I say this is one of the finest England teams of my lifetime.

The greatest? My vote would still be for the Hutton, Washbrook, Edrich, Compton, Graveney, Bailey, Evans, Laker, Trueman, Bedser, Statham team of my schooldays, but I concede nostalgia weighs heavily in my verdict.

The Andrew Strauss side is as good an all-round England team as I have seen in years, but let’s remember the opposition. Australia are in the early stages of rebuilding after their total dominance, the West Indies are the weakest I have ever known them, and this India side are well past their sell-by date. They are paying the price of too much IPL cricket, losing their technique and five-day Test tactical nous in the mad scramble for profits.

I just hope Tendulkar reaches his ton of tons before he goes home. The Little Master’s legend does not deserve to be dented in its autumn stage.

Thank you Strauss and Co for helping to put a smile back on this old hack’s face. If they asked  me I could write a book (© Rodgers & Hart)